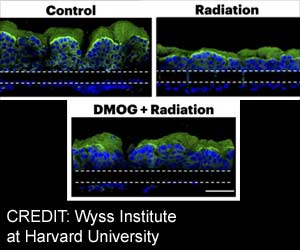 Chernobyl. Three Mile Island. Fukushima. Accidents at nuclear power plants can potentially cause massive destruction and expose workers and civilians to dangerous levels of radiation that lead to cancerous genetic mutations and death. While the total number of people affected by nuclear incidents is small, every year millions of cancer patients around the world receive radiation therapy, which, while lower-dose, can still cause harmful cumulative side effects.


Because exposing healthy people to radiation for clinical trials would be unethical, efforts to identify drugs that can mitigate the effects of radiation exposure have been limited to animal studies, which are notoriously poor predictors of how a given drug will behave in humans.

The results are reported in Cell Death & Disease.

"When cancer patients receive radiation treatment for a specific organ, other organs are also affected, mostly the bone marrow, the lung, and the gut," says first author Sasan Jalili-Firoozinezhad, who is a Graduate Student at both the Wyss Institute and the Institute for Bioengineering and Biosciences at IST in Portugal.

"Radiation in the gut causes the microvilli projections of the epithelial cells to retract, leading to poor nutrient absorption, leakage through the normally tight intestinal barrier, and destruction of the beneficial microbiome. We wanted to see if we could replicate that response in our Gut Chip, and then reverse it with DMOG," said Sasan Jalili-Firoozinezhad.

The Gut Chip is a microfluidic device composed of a clear, flexible polymer that contains two parallel microchannels separated by a porous extracellular matrix membrane. One channel is coated with human intestinal epithelial cells, the other with human endothelial cells that mimic the blood vessel wall.

Cell culture medium is perfused through both channels, and suction is applied to side chambers within the chip at regular intervals to cyclically stretch the tissues, mimicking the peristalsis-like motions that move food through the intestine. Under these conditions the epithelial cells spontaneously form intestinal villus-like structures and surface microvilli that increase the cells' surface area for nutrient exchange, much as they do in living intestine.

When the researchers exposed the Gut Chip to a radiation dose of 8 Gray, which is known to cause gastrointestinal effects in humans, they observed increases in several markers of cell damage in both the endothelial and epithelial cells: apoptosis (or cell death), generation of reactive oxygen species (ROS, or free radicals), double-stranded DNA breaks, degradation of lipids in the cell membrane, and loss of microvilli structure, as well as disruption of the junctions between neighboring cells and of the mucous membrane that protects the intestinal wall from bacteria and toxins.

When the scientists repeated the experiment on a chip that only contained epithelial cells, they observed that the irradiated cells did not have the typical response to radiation: their microvilli were not blunted, their mucosal barrier was not disrupted, their cell barriers remained functional, and they had lower ROS generation. This surprising result suggests that endothelial cells play a key role in the gastrointestinal damage observed in radiation injury.

"This finding helps explain why other models of the human gut that don't include endothelial cells generally fail to mimic the gut's response to radiation injury," says Oren Levy, Ph.D., M.B.A., co-author of the paper and Staff Scientist at the Wyss Institute.

The team then exposed the Gut Chip to DMOG, a compound that has been shown to prevent radiation injury in rats by increasing the production of the protective proteins HIF-1α and HIF-2α, prior to administering radiation. They observed that DMOG pre-treatment significantly reduced apoptosis, ROS generation and lipid degradation in both epithelial and endothelial cells, intestinal permeability, and microvillus injury of intestinal epithelial cells, a result that has never been demonstrated in human tissues before.

"Now that we have successfully tested a potential drug candidate in a human organ system, our goal is to use this chip to identify new radioprotective drugs by physiologically mimicking radiation damage in the gut," says Jalil-Firoozinezhad.

While this study used a line of infinitely replicating Caco-2 human intestine cells, a newer iteration of the Gut Chip uses primary human intestinal cells taken directly from patients. "The grand vision for the future of this technology is to link different Organ Chips into a fully personalized body-on-chips model, where we'd be able to take cells from a patient and test which medicines will best protect all their organs from radiation, either higher doses from nuclear events or lower doses from off-target cancer treatment," says Levy.

"This research marks an important advance bringing us closer to realizing our goal of creating clinically relevant chips for each major organ system that can help predict and prevent disease, and importantly, it meets a longstanding need for more human-relevant models of radiation toxicity that can be used to develop appropriate countermeasure therapies, which was the challenge raised by the Food and Drug Administration (FDA) when they funded our work," says Wyss Founding Director Donald Ingber, M.D., Ph.D., who is also the Judah Folkman Professor of Vascular Biology at HMS and the Vascular Biology Program at Boston Children's Hospital, as well as Professor of Bioengineering at Harvard's John A. Paulson School of Engineering and Applied Sciences (SEAS). 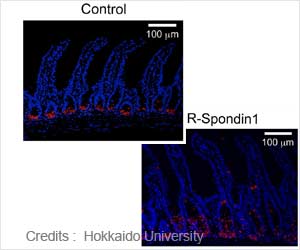 Vitamin A Balance Influences Protein That Protects Gut Immunity
ISX, a protein molecule turns on and off genes involved in the pathway based on beta-carotene availability.
READ MORE

Gut Bacteria Linked to Metabolic Syndrome
Intestinal microbiome a 'garden' of bacterial, viral and fungal genes plays a substantial role in the development of obesity and insulin resistance in mammals.
READ MORE