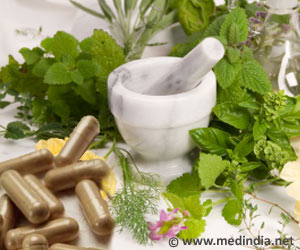 New research presented at the annual meeting of the American Society of Tropical Medicine and Hygiene (ASTMH) reveals that laboratory animals fed a modified version of a common human dietary supplement were completely cured of intestinal worms that belong to a family of parasites that currently infect 1.5 billion people.

"We need to replicate the results in other animals and also in humans, but this is an important development in our effort to find a safe, affordable and effective way to confront a major global health problem," said Raffi Aroian, PhD, principal investigator of a team of scientists at the University of California, San Diego who are seeking new treatments for a variety of parasitic worms known as "soil-transmitted helminths" or STHs.

While rarely fatal, STHs and other intestinal worms are leading contributors to disease in school-age children in low-income countries and are viewed by many experts as among the most burdensome of the world's "neglected tropical diseases" or NTDs.


The study conducted by Aroian's team focused on hookworms, common STHs that are found in soil that has been contaminated with human feces. Hookworms can linger in the intestines for years, where they feed on blood and tissue, robbing their hosts of iron and protein and interfering with absorption of critical nutrients. They frequently cause stunting and cognitive delays in infected children. They also can have long-term effects on educational achievement and productivity.
Advertisement
Currently, the only drugs available to treat hookworms in humans were originally developed to combat parasites that infect farm animals. Aroian said they are only partially effective against the range of intestinal parasites that infect humans. There is also evidence of reinfections occurring rapidly after treatment and low levels of efficacy in some places.

At the ASTMH meeting, Aroian's colleague Yan Hu, PhD reported findings from a study in which hamsters were deliberately infected with hookworms. The hamsters were later divided into two groups. One group received a common strain of the bacteria Bacillus subtilis, which is often marketed as a "probiotic"a dietary supplement consumed as a pill or added to food that is intended to promote digestive health. It also is the key ingredient in a popular Japanese fermented soybean dish called Natto. The other group received the same probiotic, except the researchers modified it to express a protein derived from a closely related bacterium, Bacillus thuringiensis or Bt, which is known to be safe in humans but potentially lethal to intestinal worms.

Hu said the next step will be to conduct tests in different types of animals and against different types of STHs. If the probiotic continues to perform well against multiple intestinal parasites and is shown to be safe, then researchers would consider testing in humans, she said.

The research is supported by grants from the Bill & Melinda Gates Foundation and the National Institutes of Health.

"While the research has yet to move beyond tests in animals, the human health burden is so immense and the solutions so few that it's gratifying to see progress being made toward finding new treatments for intestinal worm diseases," said ASTMH President David H. Walker, MD. "It shows that new investments in neglected tropical diseases are inspiring creative solutions for the more than a billion people in need."

Aroian said the overall goal of the work is to produce a treatment for intestinal worms that is safe, effective and affordable in the world's poorest countries, where hookworms and other STHs do the most damage. "This probiotic is a food-grade bacterial product that can be easily produced in large quantities in a simple fermenter, and it can be manufactured in a form that has a long shelf-life," he said. "It could be well-suited to providing the cheap, mass treatment we need to substantially reduce the burden of this disease."

Aroian said Bt is attractive because it is a well-understood, natural substance for controlling plant pests that is believed to be safe for animals and humans. It is frequently sprayed on organic crops and is mainly lethal to insects in their larva stage. Bt also is a bacteria used in genetically engineered corn and soybean to endow the crops with resistance to plant pests.

Aroian said that while the modified probiotic under development in his lab should be safe to consume, if it proves to be an effective intervention for intestinal worms it would be marketed as a treatment, not as a dietary supplement.

Source: Eurekalert
Advertisement
<< Food Choices Not Influenced by Mandatory Calorie Postings a...
Elite Male Athletes may be Immune to Type 2 Diabetes in Lat... >>

More News on:
Spirulina Undetected Nutrient Deficiencies: the Cause of Ill Health Diet and Nutrition Tips for Athletes Promote Your Health with Nutrition Supplements

Promote Your Health with Nutrition Supplements
As a part of preventive care one should take a good quality nutritional supplement containing ......