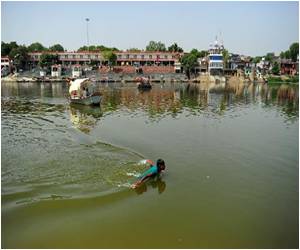 On World Water Day, a human chain was formed at the Ganga Ghat in Varanasi as part of the 'Save Water' and 'Clean Ganga' initiative.

"This initiative was started in 2010 in order to create awareness among the people," Vishwambhar Nath Mishra, Mahant of Sankatmochan Temple told ANI.


Prime Minister Narendra Modi has given top priority to cleaning of the Ganga which is also a part of a promise which he made during his election campaign.

An initiative by the United Nations, March 22 is being observed as 'World Water Day' across the world.

Source: ANI
Advertisement
<< Disinhibition That Limits Weight Loss Associated With Impair...
Do You Trust People? Your Brain Structure Depends On It >>

Thirty Feared Drowned as Boat Capsizes in River Ganga
Nearly thirty people are feared drowned after a boat capsized in the River Ganga in Bacchaon ......

Cleaning of Ganges, Can Modi Do It?
Prime Minister Narendra Modi vowed to succeed in the endeavor of cleaning up the filthy waterway ......

'Clean Up the Ganges Drive' By Allahabad Residents
Residents of Allahabad organised a cleaning drive of the River Ganges on Sunday to create ......