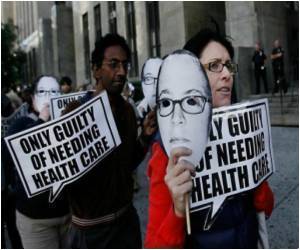 Are you poor, working and uninsured in America? If so, get ready for the worst in 2014, when people without health insurance will have to pay a fine.

The new government-approved format that health insurance companies must provide on their services to Americans, was unveiled on Thursday.
Advertisement

The Patient Protection and Affordable Care Act (PPACA) if upheld by the US Supreme Court, will require almost everyone in the country to purchase some form of insurance by 2014.


According to a report published in dentonrc.com, David Shipler, author of the national bestseller, The Working Poor: Invisible In America says that things may not improve on the healthcare horizon for the poor in the US. On the contrary, they could actually take a turn for the worse.

Many US insurers stopped offering individual coverage for children after the 2010 health care overhaul as no child could be refused on the grounds of pre-existing diseases.
Advertisement
Shipler has spent years talking to and writing about people near-about the poverty line and what they do when they fall ill.

He says that the poor spend every penny they earn on rent, electricity, transportation, food, etc., with nothing left to guard against unforeseen problems.

When Congress passed the PPACA in March 2010, the intention was to help people purchase affordable health insurance through state-run exchanges. The new law does this by eliminating the ability of insurance companies to deny coverage because of pre-existing conditions, and by implementing sliding-scale premiums so people earning wages at or slightly above the poverty level can have maximum access to health care.

Shipler worries that the subsidies will not be generous enough to support families who are above the Medicaid limit, and that many will just pay the tax penalty, which will be much less than the insurance premium. Such families will be worse off than before, still uninsured and penalized.

In the meantime, what do America's poor, working and uninsured, who number about 1.37 million in the Dallas-Fort Worth region alone, do about health insurance and healthcare?

Firstly they don't get insured in order to save money to pay critical household bills. Secondly, they take to do-it-yourself strategies.

They rely on blood screenings administered by plasma or blood donation centers to alert them to a potential problem. They buy generic forms of over-the-counter insulin to conduct diabetes treatments. They take aspirin to try to thin out blood clots. And they fit their own joints back into place and accept the chronic pain.

The poor, working and uninsured are a huge population in Texas, which, at 25 percent, has the highest rate of uninsured people in the US.

Ten more states in the US will receive a total of $230 million in grants, the federal government said today.
Advertisement
<< Risk of Heart Disease and Cancer Lower in Regular Coffee Dr...
New Crowing Technique for Treating Tooth Decay >>