American scientists have shed new light on how two cancer-promoting genes enhance a tumour's capacity to grow and survive under conditions where normal cells die.

Researchers at the Johns Hopkins Kimmel Cancer Center say that this knowledge may offer new treatments that starve cancer cells of a key nutrient - sugar.

They, however, caution that research does not suggest that altering dietary sugar will make any difference in the growth and development of cancer.


"Cancer cells adapt to living within the inner layers of a tumor, a place where circulating nutrients are relatively scarce. We wanted to know what makes these cancer cells survive under such conditions," says Dr. Nickolas Papadopoulos, associate professor at the Johns Hopkins Kimmel Cancer Center.

The researchers worked with colorectal cancer cell lines that carry two of the most common cancer genes-KRAS and BRAF.

They went on a hunt for genes that were controlled by KRAS and BRAF, and allowed cancer cells to be more fit for survival.

Nearly 50 per cent of all colon cancer patients carry KRAS mutations in their tumours, and another five percent of these patients have alterations in BRAF.

Describing their study in the journal Science Express, the researchers said that their hunt quickly narrowed to one gene, GLUT1, which was consistently turned on at high levels in cells laden with KRAS and BRAF mutations.

Proteins made by GLUT1 are located on the cell surface and transport glucose into cells' interiors. With increased expression of the GLUT1 gene, cells make more GLUT1 transporters and ingest more glucose.

"We think increased GLUT1 is a survival adaptation that makes cancer cells very efficient at gathering what little sugar exists in these areas," says Dr. Bert Vogelstein, director of the Ludwig Center for Cancer Genetics and Therapeutics and Clayton Professor of Oncology at the Johns Hopkins Kimmel Cancer Center, as well as Investigator in the Howard Hughes Medical Institute.

The researchers revealed that they carried out various experiments to test how cancer cells with KRAS and BRAF mutations fare in both standard and low glucose conditions, comparing them with so-called "wildtype" cancer cells that do not have the KRAS or BRAF gene mutations.

In one set of experiments, they placed both types of cancer cell lines - those with KRAF/BRAF mutations or without-in lab dishes with normal and high glucose environments.

In the glucose-depleted environment, cells with KRAS/BRAF mutations had far better uptake of glucose than wildtype cells. When they knocked out the GLUT1 gene, this difference disappeared.

The researchers then tested whether cancer cells with KRAS/BRAF mutations would outpace growth of cells without these mutations. They mixed both groups of cells together and placed them in normal and low glucose environments.

Both sets grew equally well in normal conditions, but on the lab dishes with low glucose, cancer cells with the KRAS/BRAF mutations survived while those without the mutations quickly died.

Consequently, the KRAS/BRAF mutant cells rapidly became the predominant cell in the population.

"These gene mutations clearly give colon cancer cells the ability to grow in sugar-depleted environments, such as those in tumors," says Papadopoulos.

With a view to finding out whether this metabolic change could be used to treat tumours with KRAS or BRAF mutations, the team tested an investigational drug called bromopyruvate, which inhibits glucose metabolism.

They found that the drug blocked cancer growth in mice with implanted human tumours containing KRAS or BRAF mutations, and had no toxic side effects in the mice. 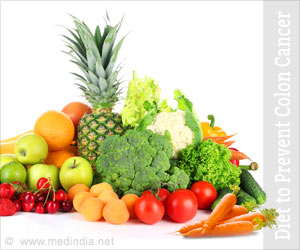 Diet to Prevent Colon Cancer
Diet and lifestyle play an important role in reducing the risk and delaying the onset of cancer. Incorporating and eliminating certain other foods may reduce the risk of acquiring colon cancer.
READ MORE
Diverticulosis and Diverticulitis
Diverticulosis is characterized by sac-like outpouching in the intestinal wall. Inflammation of diverticula results in diverticulitis.
READ MORE