How to Treat Musculoskeletal Disorders 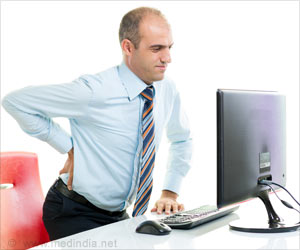 A new biomaterial can be used to study how and when stem cells sense the mechanics of their surrounding environment, found a team led by Robert Mauck, PhD, the Mary Black Ralston Professor for Education and Research in Orthopaedic Surgery, in the Perelman School of Medicine at the University of Pennsylvania.

With further development, this biomaterial could be used to control when immature stem cells differentiate into more specialized cells for regenerative and tissue-engineering-based therapies. Their study appears as an advance online publication in Nature Materials this month. During early development in an embryo, the progenitor cells of many types of musculoskeletal tissue start out in close contact to each other and over time transition into an organized network of individual cells surrounded by an extracellular matrix (ECM).

Two leading medical research bodies announces a major new research centre to tackle the impact of musculoskeletal disorders on people's ability to work.
Advertisement
‘During musculoskeletal development, a cell's surrounding environment gradually transitions from one that is rich in cell-to-cell interactions to one that is dominated by cell-extracellular matrix interactions.’
Tweet it Now

This matrix is made up of polysaccharides and fibrous proteins secreted by cells, providing structural and biochemical support to the cells within. Throughout the course of embryo development, the ECM gets stiffer due to increased amounts of matrix material and crosslinking, eventually guiding stem cells to develop into more specialized cells across various tissue types.


It also acts as a medium through which mechanical information is transmitted to cells (such as forces generated with such normal activities as walking or running).Mauck and his colleagues developed a new biomaterial that allows scientists to systematically study how the cell-to-cell interactions present in early development combined with cell-ECM interactions to regulate stem-cell differentiation. Cells can sense the inherent stiffness of their surrounding environment, which plays an important role in guiding stem-cell differentiation and generating the mechanical properties of tissues.

According to a study, the value of medical treatment can be far greater than the cost of the treatment.
Advertisement
During musculoskeletal development, a cell's surrounding environment gradually transitions from one that is rich in cell-to-cell interactions to one that is dominated by cell-extracellular matrix interactions. However, how these stem cells balance their interpretation of seeing one another and seeing this increasingly stiff matrix are not well understood. To examine the response of stem cells to different mechanical and material inputs, Mauck and colleagues looked at protein complexes that move to the nucleus in response to these signals, called YAP/TAZ proteins.

Once in the nucleus, these proteins help guide the differentiation of stem cells to become the specialized cells that reside in various tissue types. The team showed that this new biomaterial platform can enable scientists to study how the proteins involved in cell-cell contact (N-cadherins) are able to mask stem cell inputs from the accumulating ECM (fibronectins) across a range of tissue stiffness. The cell-to-cell cues presented by the biomaterial reduced the ability of stem cells to pull on the ECM molecules, which in turn reduced the amount of YAP/TAZ molecules present in the nuclei of developing cells.

This resulted in an altered interpretation of ECM stiffness by the cells and ultimately how these cells differentiated. "We want to learn how we can trick these cells to think that they're in a softer environment," says Mauck. This could enable scientists and clinicians to keep stem cells in an uncommitted state longer during regenerative therapies, so as to increase cell number and keep them from committing to a certain, final fate, which may increase their physiological impact when implanted.

"Our long-term goal is to be able to intercept how a cell determines the stiffness of its surrounding environment," said first author Brian D. Cosgrove, a doctoral student in the Mauck lab. "For example, we ideally want to put stem cells into stiff materials for cartilage repair that would withstand the forces present in everyday life, but then the stem cells preferentially turn into bone and other fibrous tissue types. We need to find new ways to trick them into thinking they're in the correct environment so they will remain specialized cartilage cells." This fine control of what a precursor cell ultimately senses and the resulting tissue it produces may be important for treating disorders, such as out-of-place bone growth called heterotopic ossification.

New Zealand's health and welfare system is spending more than $5.5 billion every year due to a high number of people suffering from musculoskeletal disorders.
Advertisement

Inflammation of the cartilage that joins the ribs to the breastbone is known as Costochondritis. It is one of ...
This site uses cookies to deliver our services.By using our site, you acknowledge that you have read and understand our Cookie Policy, Privacy Policy, and our Terms of Use  Ok, Got it. Close
×