How to Find Winning Sperm? 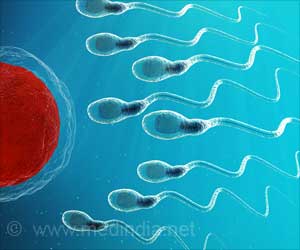 Millions of sperms enter the competition to fertilize, but only one wins the race to the egg. The winning sperm has a few key molecular characteristics that differentiate them from those left behind, according to new research. The findings of the study are published in the journal eLife.

Sperm tails are lined with channels comprising pores for calcium entry, which help sperm move through the female reproductive tract. Each pore of these calcium channels consists of four subunits, CatSper 1 through 4, which operate together to serve functions such as managing the mobility and navigation of the sperm.

Advertisement
‘A better understanding of how the fittest sperm cells are chosen and how those left are discarded following fertilization in the female reproductive tract can enhance current assisted reproduction strategies.’

Researchers refer to them as the sperm's racing stripes. According to scientists, one of the subunits that form these racing stripes is important in selection of sperm for fertilization.


Using artificial neural network modeling and 3D molecular imaging, Chung's lab devised a way to visually track and quantify sperm in female mice's reproductive tracts after mating. They found that the sperm which advanced from uterus to oviduct had the channels containing intact Catsper1 subunit. Other sperms likely lost functioning CatSper ion channels by losing intact CatSper1. These sperms become immobile and are left behind.
Advertisement
Sperms that make it far into the female reproductive tract share additional traits. These sperms are most likely to have already lost a cap-like structure known as the acrosome in the sperm head, possibly a prelude to fertilizing the egg.

More understanding of interactions within the reproductive tract and molecular signatures of sperm may help inform new infertility treatments or, conversely, male birth control. Mutations have been observed in the CatSper genes of infertile men and could target fertility treatments. Chung said Since the CatSper channel is necessary for sperm to function, blocking it could lead to non-hormonal contraceptives with minimal side effects in both men and women.

Chung stated, "Better understanding how the fittest sperm cells are chosen and how those left are discarded after fertilization in the female reproductive tract can enhance current strategies for assisted reproduction."

Spermatocele
Spermatocele is a condition in which there is a blockage in the epididymal duct, resulting in semen ...

Undescended Testicles
An undescended testicle / testis is one that has not descended into the scrotal sac before birth. .....

Overweight and Obesity May Lower Sperm Quality
Overweight and obese men are at risk of lower sperm quality. However, losing weight can help men ......