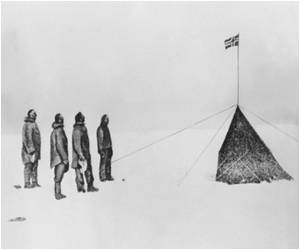 By relying on a high fat diet consisting of seals and their blubber, polar bears have managed to adapt themselves to the cold life of the Arctic. In a study published by Cell Press May 8th in the journal Cell, researchers discovered that mutations in genes involved in cardiovascular function allowed polar bears to rapidly evolve the ability to consume a fatty diet without developing high rates of heart disease. Moreover, the study revealed that polar bears diverged from brown bears less than 500,000 years agomuch more recently than estimates based on previous genomic data.

"In this limited amount of time, polar bears became uniquely adapted to the extremities of life out on the Arctic sea ice, enabling them to inhabit some of the world's harshest climates and most inhospitable conditions," says senior study author Rasmus Nielsen of the University of California, Berkeley.

Up to half of the body weight of polar bears consists of fat, and their blood cholesterol levels are high enough to cause cardiovascular disease in humans. But it has been a mystery how polar bears are able to cope with these major risk factors for heart disease. To understand the evolutionary processes driving such adaptations to extreme environments, it's essential to first establish a reliable time frame for when polar bears emerged as a species.


To address these questions, Nielsen teamed up with Eske Willerslev of the University of Copenhagen and Jun Wang of BGI-Shenzhen to sequence and analyze the complete genomes of 79 polar bears from Greenland and 10 brown bears from different locations around the globe. They found that the two species diverged less than 500,000 years ago, compared with estimates of up to five million years ago based on previously reported genomic data.
Advertisement
Since then, polar bears evolved rapidly by accumulating mutations in genes that are involved in cardiovascular function and fatty acid metabolism and have been linked to heart disease in humans. One such gene, called APOB, is known to play a role in moving cholesterol from the bloodstream into cells, thus reducing the risk of heart disease. "Such a drastic genetic response to chronically elevated levels of fat and cholesterol in the diet has not previously been reported," Willerslev says. "It certainly encourages a move beyond the standard model organisms in our search for the underlying genetic causes of human cardiovascular diseases."

Polar Bears Might Be Driven to Extinction By Melting Sea Ice
A climate-change expert has warned that polar bears could soon disappear from parts of the Arctic .....

Study Reveals How Polar Bears Stay Warm
Genetic adaptations related to the production of nitric oxide, a compound that cells use to help ......