How Marital Status Influences the Onset of Frailty in Older People 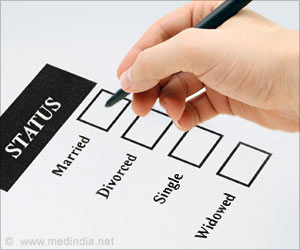 Widowed women have a lower risk of frailty than married women, according to the study published in the Journal of Women's Health.

Caterina Trevisan, and coauthors from University of Padova and the National Research Council's Institute of Neuroscience, Padova (Italy) predicted that unmarried elderly people would have a higher risk of becoming frail than their married peers.

Connection Between Frailty and Survival After a Lung Transplant

A new study from physicians at Mayo Clinic is among the first to show a definitive connection between frailty and survival after a lung transplant procedure.
Advertisement
‘Men who are single or widowed have a higher risk of becoming frail than married, but when it comes to women, married have a higher risk of developing frailty than who are widowed.’

Marital status has traditionally been associated with reduced risk of disability and death. For this study, the researchers evaluated a group of men and women >65 years of age for more than 4 years.


The authors' prediction held true for elderly men, with those never married or widowed having a higher risk of developing frailty. However, widowed women had a significantly lower risk of becoming frail than did married women, according to the findings reported in "Marital Status and Frailty in Older People: Gender Differences in the Progetto Veneto Anziani Longitudinal Study". The authors identify the factors contributing to frailty that were more influenced by marital status.

New research suggests that frailty is a strong risk factor for dying prematurely after a kidney transplant regardless of age.
Advertisement
"This study adds to our understanding of how marital status influences the onset of frailty in older people, but reveals surprising gender-specific differences," says Susan G. Kornstein, MD, Editor-in-Chief of Journal of Women's Health, Executive Director of the Virginia Commonwealth University Institute for Women's Health, Richmond, VA, and President of the Academy of Women's Health.

How Grip Strength Changes As We Age

Researchers from the Medical Research Council Lifecourse Epidemiology Unit, University of Southampton have shed new light on how grip strength changes across the lifespan.
Advertisement
<< Shift to a Greener Neighborhood to Avoid Diabetes and Hypert...
Individualized Hypertension Management Best for Elderly With... >>

Stress Hormone Levels may be Linked to Frailty

Iron Intake Calculator The Essence of Yoga Blood Donation - Recipients Find a Hospital Post-Nasal Drip Noscaphene (Noscapine) Calculate Ideal Weight for Infants Find a Doctor Diaphragmatic Hernia Indian Medical Journals
This site uses cookies to deliver our services.By using our site, you acknowledge that you have read and understand our Cookie Policy, Privacy Policy, and our Terms of Use  Ok, Got it. Close
×