How HIV-Infected Cells Cause a Range of Metabolic Conditions? 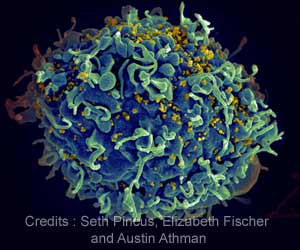 HIV infects only a limited repertoire of cells expressing HIV receptors. But HIV infection is also associated with conditions involving the dysfunction of cells that cannot be infected by HIV, such as hardening of the arteries, dementia, kidney impairment, and certain heart problems. These HIV-associated conditions persist even after successful application of antiretroviral therapy, when no virus is found in the blood. Many of these conditions involve impairments in cholesterol metabolism. In the new study, Sviridov and colleagues examined the mechanisms that may contribute to HIV-associated metabolic conditions.
Advertisement
‘The study findings show how HIV infection causes a wide range of conditions that are associated with dysfunction in uninfected cells.’

The results showed that the HIV protein Nef is released from infected cells in vesicles that are then rapidly taken up by uninfected bystander white blood cells, impairing cholesterol metabolism in these cells. This impairment causes the formation of excessive lipid rafts -- discrete lipid domains present in the external leaflet of the plasma membrane - and the re-localization of inflammatory receptors into rafts, triggering inflammation. The findings demonstrate how a single viral molecule released from infected cells into circulation may contribute to a range of pathogenic responses.


The authors add, "Our study points to a common mechanism of various co-morbidities of HIV infection. This opens a possibility to target this mechanism using drugs affecting cholesterol metabolism to treat several co-morbidities in people living with HIV."