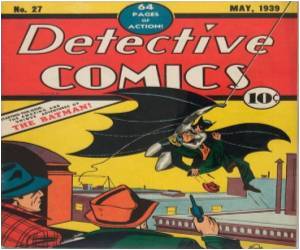 One might ask what's a good way to make physiology class more interesting - the answer is Batman - at least for one professor.

University of Victoria, Victoria, British Columbia professor E. Paul Zehr describes his success in using the Caped Crusader to engage students in the study of physiology.

A study says that in order for medical students to ultimately provide quality patient care medical schools should turn to radiologists to help them teach physiology.
Advertisement

"Batman has such powerful resonance with readers because he is a (fictional) human with superpowers that seem within reach if we only work at it," he said.


Zehr uses Batman to discuss the various components of exercise and physical training and illustrate how the body's physiological systems respond.

Researchers and scientists are tapping into comparative physiology for forecasting the effects of global warming.
Advertisement
He believes that connecting science to popular culture helped students understand the lessons better.

He first presented a formal analysis of the personal and physical discipline that would be required to transform an ordinary mortal into a superhero in his book, 'Becoming Batman: The Possibility of a Superhero'.

"The more that people understand science, and the physiology of things in particular, the better for everyone," says Zehr.

Zehr has written a second book in this genre, 'Inventing Iron Man: The Possibility of a Human Machine', to be published later this year.

The article appears in new edition of Advances in Physiology Education.

In a bid to know the complete physiology behind kidney's work process, scientists have found that high blood pressure takes a toll on small filtering units in the kidney, called glomeruli.
Advertisement
<< Brit Kids Falling Asleep in School After Long Nights On Com...
'Climate Change' a Scarier Phrase Than 'global Warming' >>