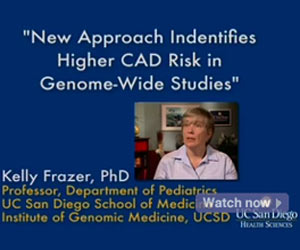 "Gene desert" on chromosome 9 - hot spot for coronary artery disease (CAD) risk was discovered in a recently conducted genome-wide association studies. In this study the genomes of people were compared for genetic variations. Gene deserts are large genomic segments devoid of genes.

Now scientists at the University of California, San Diego School of Medicine and colleagues have developed a novel approach to detect long-distance chromosomal interactions and have applied this method to the chromosome 9 gene desert, revealing that the association results from an altered inflammatory signaling response in individuals with increased CAD risk.

The findings are published in the Feb. 10 issue of Nature.


The researchers followed up on results of the widely reported genome-wide association studies in 2007 and 2008, noting that the gene desert interval on chromosome 9 contained DNA variants (called single nucleotide polymorphisms or SNPs) associated with CAD and type 2 diabetes mellitus (T2D). Based on these findings, Francis Collins, director of the National Institutes of Health and a leader in the original Human Genome Project, publicly described the chromosome 9 interval as "like the seat of the soul of the genome."

Animation of Heart Attack symptoms. Heart attack is caused due to ischemia of the heart muscles that results in pain and the other symptoms of heart attack.
Advertisement
The DNA variants associated with CAD and T2D are located close to one another on chromosome 9, but inherited independently so genetic risk for developing CAD is not associated with risk for the T2D.

In comparing the genomes of people with heart disease and people without, Frazer and colleagues found that those who carried the chromosome 9 DNA risk variants for CAD had a two-fold higher risk of early onset myocardial infarction (a heart attack) than non-carriers.

"The association of this interval with CAD was a surprise and not expected as it is a ï¿½gene desert'' and the flanking genes, which are far away, have little to do with lipid metabolism, one of the primary factors in heart disease," said one of the study''s corresponding authors Kelly A. Frazer, PhD, professor in the Moores Cancer Center, UCSD Department of Pediatrics and Rady Children''s Hospital San Diego, a research and teaching affiliate of the UCSD School of Medicine.

The research team took an even closer look at the relevant region of chromosome 9, called 9p21, and discovered that the 9p21 DNA sequence, which is devoid of protein-coding genes, is particularly rich in potential regulatory elements influencing disease risk. They identified 33 "enhancers" or regulatory elements responsible for activating or repressing genes. The researchers determined that the 9p21 interval is the second densest interval for predicted enhancers in the entire human genome, and six times denser than the genome on average.

The DNA variants associated with CAD appear to disrupt enhancer activity involved in cellular signaling and response to inflammation in vascular endothelial cells - the cells that form the inner lining of major blood vessels.

"Our work highlights the new approach we developed for analyzing long-range chromosomal interactions and the utility of such methods for deciphering the functions of non-coding DNA variants associated with disease risk," said Michael G. Rosenfeld, MD, a professor in the UCSD Department of Medicine, Howard Hughes Medical Institute investigator and a corresponding author of the study.

The UCSD researchers plan to scale up the new approach and use other methods to annotate additional non-coding DNA variants identified through GWAS studies as being linked to human disease.

"There are thousands of DNA regulatory variants that incur increased risk for disease that we can functionally characterize for their effect on long-range interactions," said Olivier Harismendy, PhD, first author of the study and an assistant project scientist in the UCSD Department of Pediatrics and Moores Cancer Center.

Co-authors of the study include Dimple Notani, Xiaoyuan Song and Bogdan Tanasa of the UCSD Department of Medicine, Howard Hughes Medical Institute; Xiang-Dong Fu of the UCSD Department of Cellular and Molecular Medicine; Nathaniel Heintzman and Bing Ren of the Ludwig Institute for Cancer Research; and Nazli G. Rahim and Eric J. Topol of Scripps Genomic Medicine, Scripps Translational Science Institute and The Scripps Research Institute.

A single alteration in the genetic code of about a fourth of African-Americans helps protect them from coronary artery disease, a team of scientists at Johns Hopkins and elsewhere has discovered
Advertisement
<< Reduced Levels of Noradrenaline Linked to Multiple Sclerosi...
Young Adults With Autism Get No Help >>

A Chinese study has suggested that moderate-to-heavy alcohol consumption in Chinese men increases the risk of coronary artery disease (CAD).

Vent Forte (Theophylline) Drug Side Effects Calculator The Essence of Yoga Drug - Food Interactions Color Blindness Calculator Hearing Loss Calculator Selfie Addiction Calculator Find a Doctor Blood Pressure Calculator Turmeric Powder - Health Benefits, Uses & Side Effects
This site uses cookies to deliver our services. By using our site, you acknowledge that you have read and understand our Cookie Policy, Privacy Policy, and our Terms of Use