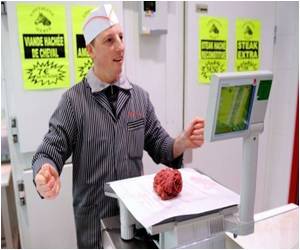 For the first time in Portugal, traces of horse DNA in meat products were detected in a pre-cooked lasagne made by Nestle and sold exclusively to hotels and restaurants known as Horeca.

Horeca is the sector of the food service industry that consists of establishments that prepare and serve food and beverages.

The ready meals are being withdrawn from the market, reported Xinhua.


"This is not a food safety problem but a question of fraud at a European level," said Antonio Carvalho, spokesperson at Nestle Portugal.

As of Tuesday, Nestle Portugal had detected just 1 percent of horse meat in its lasagne. The meat is manufactured in France using meat provided by the German company H.J. Schypke with whom the Swiss food giant has suspended commercial relations.
Advertisement
Nestle has announced that the Buitoni branded ravioli and tortellini are being removed from supermarkets after the presence of horse DNA was found in its Spanish and Italian products.

In a statement, the company explained that "the levels detected are above the threshold of 1 percent that the Food Safety Agency has set".

In recent weeks, the emergence of similar cases in other countries has seen meat products withdrawn from sale across Europe.

Testing Plan to Halt Horsemeat Scandal Approved
The European Union has approved the launch of tests for horse DNA in meat products, seeking to end ....

Horsemeat Raids Launched in Britain as Scandal Spreads
British police raided two meat plants in the first such operation searching for the source of ......

Frozen Ready-to-eat Beef is Actually Horsemeat, France Confirms
After a scandal that horsemeat was disguised as beef, France became the second European country ......