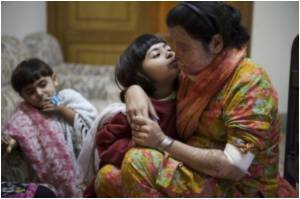 27-year-old Sonali Mukherjee is hoping for a near to normal face ten years after an acid attack. She is expected to have seven surgeries at a hospital here.

Sonali, who is from Dhanbad in Jharkhand, was only 17 when three men threw acid on her pretty face, melting and disfiguring it. The attackers are still roaming free.

In a horrifying incident, a rejected suitor has been accused of flinging a bottle of acid on the face of his ladylove, in the process scarring her .
Advertisement

A team of 18 doctors at B.L. Kapur Memorial Hospital in the national capital will now perform a set of surgeries, the cost of which will be covered by the hospital and funds collected from people through a media campaign.


"We cannot give back the face God has given but we will definitely try to give a near to normal face. We will perform at least seven surgeries in a span of 12 to 15 months," said A.S. Bath, a plastic and reconstructive surgeon at the hospital, Thursday.

Yet Another Woman Battles for Life After Acid Attack in Karnataka

Horrible fate in the form of an acid attack struck another victim on Friday. Anjamma Digamber, a 38 year old woman working in the government higher primary school at Rekulgi,
Advertisement
Over the years, Sonali has undergone 22 surgeries.

Sonali's face had suffered 90 percent burns in the attack and the new series of reconstructive surgeries will be performed to make her eyes, ears and mouth function normally since she has unable to open her mouth or speak properly.

She has vision only in her left eye. She had also lost an ear in the attack.

"In the past surgeries, tissues from her thighs, upper arm and forearm were taken and grafted on her nose and cheeks to give them shape. So we have to take tissues from her hip and abdomen," Bath said.

The doctors have performed surgery on her eyelids since she was unable to close her eyes due to the disfigurement and was losing her vision.

"For the contracture on the eyelid, a skin graft has been done. Similar procedures have been planned using innovative technologies of microscopic vascular and reconstructive surgeries," Bath said.

Praising Sonali's confidence and will power, Sanjeev Bagai, one of the doctors at the hospital, said the surgeries would cost around Rs.30 lakh.

Thirty percent of the cost would be borne by the hospital and the rest would come from funds collected through a campaign run by a news channel, he said.

"I'm thankful for everyone who contributed for my daughter's surgeries even though the government turned us down. My daughter had gone to the extent of seeking euthanasia. Now we hope she will get a new lease of life," said Sonali's father Chandi Das Mukherjee.

The case of Baby Bitta, the youngest acid attack victim came up for hearing at the Child Welfare Committee (CWC), Lucknow, Uttar Pradesh, on 12 May 2009.
Advertisement
<< Risk of Avian Flu Could Be Pushed Up By Climate Change
Alarm Set Off By Dead Rats from Jaipur's Flooded Areas >>

Baldness can be Cured and Prevented: let us see How!
View all
News Archive
News Resource
Advertisement
News Category
Parents are 'Winging It' on Their Kids' Mobile Use Ankle and Ankle Movements While Riding an Hoverboard Is It Healthy to Let Your Mind Wander? Walk Till it Hurts: Good News for Peripheral Artery Disease Patients Plus Size Models and Social Media: Where Do They Fit In?
More News
Sign up for Wellness Consult a Doctor Sign up for Selfcare