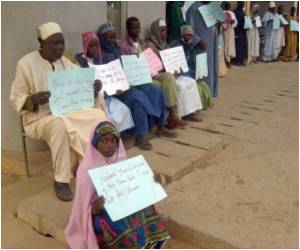 Offering hope of a better life, for a group of young women who fled abusive marriages that for some prove inescapable, are the clattering sewing machines at this northern Nigeria school.

In Nigeria's deeply impoverished north, which has some of the worst gender disparities in the world, millions of girls who never learned to read or write are pushed into marriage in their early teens, a recent study said.

There has been an increase in the numbers of child beggars roaming the streets of Nigeria, especially in the second city Kano.
Advertisement

The Tattalli Free School in the city of Kaduna was set up as a refuge for those who, overcoming fear and the pressures of patriarchal society, left their husbands when the relationships became unbearable.


"I was married and pregnant and my husband was at home doing nothing," said 17-year-old Bilkisou, the mother of a young girl.

"At times he would beat me or shout at me. When I went to report him to my father, he sent me back," she added.

Nigeria is dumping consumer paints with very high levels of lead on developing countries like India and China.
Advertisement
She left with her baby strapped to her back and came to Tattalli, where she can learn skills ranging from dressmaking to beadmaking in hopes of earning enough money to care for herself.

The school's founder, Saratu Aliyu, said she wanted to give vulnerable young women a chance to learn a marketable skill and save them from having to sell themselves for survival.

"You find them going into prostitution, you find them getting into wrong hands," said Aliyu, who funds the school with her own money.

"So many things could happen to them because they cannot help themselves, and anybody who is in need of money, anything that comes your way, you try your hands at it."

The roughly 150 students at Tattalli should, in principle, have had access to public primary and secondary education, which is free in Nigeria.

But in reality an education brings extra costs that many families cannot satisfy. Some teachers are even said to demand money to pass students.

"A married woman is one less mouth to feed," Rukayyat Adamu, the Tattalli school's director.

In the north, more than two-thirds of girls aged 15-19 are unable to read a sentence, compared to less than 10 percent in the southern part of the country, according to a British Council report published in May.

Half of all women in the region are married by the age of 16, the report further said, while the Global Campaign for Education estimates that 50 percent of northern girls are not even enrolled in school.

Worldwide, Nigeria ranks 118 out of 134 countries on the Gender Equality Index, the British Council study said.

Kaduna is also one of several northern cities hit hard by the radical Islamist group Boko Haram, responsible for scores of attacks across the region in recent months.

A suicide blast at a church last month sparked sectarian mob violence and Kaduna state, where Kaduna city is the capital, was placed under a tight curfew.

"Men who become frustrated by inability to take care of their families turn their wives to punching bags when they complain," said Aliyu.

At the school she founded five years ago, gathered in a small shaded courtyard, a group of teenagers, including Mansoura Sani, were learning how to make dresses.

She said that not long after her 10th birthday her family promised her to a much older man, who already had two wives.

"His older children fought and his wives often made fun of me," she recalled.

She ran to the home of a cousin in Kaduna and later made her way to Tattalli, and said she hopes the education she is receiving may help her marry again.

"This will make a difference because men appreciate educated women. They accord them more respect," she said.

"I could also be independent."

Source: AFP
Advertisement
<< Greece Wishes For a ray of hope
Teens Who Count Their Blessings Have Better Emotional Healt... >>