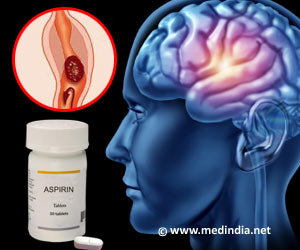 Aspirin not only promotes bleeding events but is now also known to inhibit wound healing. New research published in The Journal of Experimental Medicine now describes how aspirin acts on key skin cells called keratinocytes, delaying skin repair at wound sites. A better understanding of this process offers hope for the development of drugs to encourage wounds to heal.

The public health impact of chronic wounds is significant, affecting 6.5 million people in the US alone. Chronic wounds, a common complication of diabetes, are an increasing healthcare burden due to the rising incidence rates for obesity and diabetes. Wound healing is a complex process that is dependent on the restoration of the epithelial layer, the outermost layer of the skin, over the wound surface. Skin cells called keratinocytes play an important role in this process; when keratinocyte migration across the wound is defective, wounds such as diabetic ulcers cannot heal and become chronic wounds. However, we do not fully understand how keratinocyte movement during wound healing is regulated.

A three month treatment with 300 mg IV aspirin does not improve the functional outcome of alteplase-treated acute ischemic stroke patients. However, the risk of developing SICH and SAEs is enhanced.
Advertisement

Researchers from Japan were prompted to investigate the role of a molecule called 12-HHT and its receptor BLT2 in wound healing; 12-HHT is produced during blood coagulation following skin injury and BLT2 is found on the surface of keratinocytes. The researchers showed that 12-HHT promotes the re-formation of the epithelial layer at wound sites by enhancing the migration of keratinocytes. They discovered that high dose aspirin, the most commonly used nonsteroidal anti-inflammatory drug, delays wound healing by reducing the production of 12-HHT. The researchers also found that a synthetic mimic of BLT2 accelerated wound healing in diabetic mice (a model that is commonly used to investigate delayed wound healing).


"This study describes a novel mechanism for aspirin's effect in delaying wound healing and suggests that aspirin should be used with caution in patients with chronic wounds," says lead author Takehiko Yokomizo.

A headache literally means 'pain in the head'. It is a common complaint that may occur frequently in some
Advertisement
Further work will be required to establish whether optimal treatment for wound healing might require a combination of approaches, such as BLT2 agonists together with growth factors to promote the number of wound-healing cells at the wound site, but this study offers hope that it may be possible to develop drugs that promote the healing of chronic wounds in humans.

Recurrence of Venous Thromboembolism can be Checked By Aspirin

Venous thromboembolism is the formation of blood clot in the deep veins of the body such as in legs. It can be cured by aspirin administration. Aspirin is a potent pain killer.
Advertisement
<< HaploScore Helps Detection of DNA Shared Between Individual...
Understanding Prader-Willi Syndrome, a Parental Imprinting ... >>

Comparison of Apixaban and Aspirin in Preventing Stroke

Hearing Loss Calculator Diaphragmatic Hernia Find a Doctor Nutam (400mg) (Piracetam) How to Reduce School Bag Weight - Simple Tips Post-Nasal Drip Loram (2 mg) (Lorazepam) Sanatogen A-Z Drug Brands in India Sinopril (2mg) (Lacidipine)
This site uses cookies to deliver our services. By using our site, you acknowledge that you have read and understand our Cookie Policy, Privacy Policy, and our Terms of Use