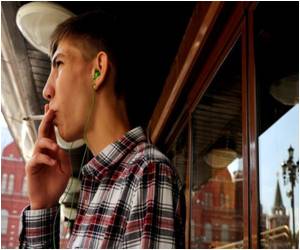 People who smoke both cigarettes and waterpipes are at considerable risk for dependence and tobacco-related diseases, such as cancer, heart disease and stroke later in life, say researchers.

The study, the first of its kind to assess trends in cigarette and waterpipe tobacco smoke based on long-term data, reveals few users perceive dangers of waterpipe tobacco. A common misconception about waterpipe smoking is that it is not as harmful as cigarette smoking.

In the past several years, a marked increase in waterpipe tobacco smoking, also known as hookah, has occurred among college students, especially those who did not smoke cigarettes before.


While waterpipe smoking also can attract non-cigarette smokers, recent evidence has shown that a significant proportion of current cigarette smokers are using waterpipes, making them dual users of these tobacco products.

College Women Hooked to the Hookah in The United States

A recent study conducted in The US has outlined that one out of four college women in the US are loving the hookah and also believe that they are much safe than cigarettes.
Advertisement
In a study, researchers found that dual users - people who smoke both cigarettes and waterpipes - may have an increased exposure to nicotine, increased risk for tobacco dependence and are less likely to quit tobacco use.

"We often assume that everyone, including college students, is knowledgeable about the health risks associated with tobacco smoking," said principal investigator Aashir Nasim, Ph.D., National Institute on Minority Health and Health Disparities scholar and associate professor of psychology and African American studies in the VCU College of Humanities and Sciences.

Secondly, the team found that compared to exclusive cigarette smokers or exclusive waterpipe users, dual cigarette and waterpipe users report being more susceptible to peer influences and perceive the probability of addiction associated with waterpipe tobacco smoking to be relatively low.

The team is now examining other types of dual use - for example, dual cigarette and cigar use - on college campuses. This work is being done in collaboration with Danielle Dick, Ph.D., associate professor of psychiatry, psychology and human and molecular genetics at VCU, and her Spit for Science research team.

The study was published online this week in the Journal of American College Health.

The Food and Drugs Authority had conducted a raid on the hookah bar, Paint Ball, in Gunthala village on the outskirts of Panchkula.
Advertisement
<< Bath Salts With Ingredient 10 Times Stronger Than Cocaine
Lethal Methanol Bootleggers Nabbed: Czech Police >>