Hong-Kong to Give Stress the Boot At Laughter Clubs

Hypnotherapist Dick Yu is on a noble mission that appears almost impossible to Hong Kong people. He is bent on making the Asian financial hub's seven million residents laugh.

"Hong Kong people don't laugh because they are under constant pressure to make more money, to make life better," says Yu, who has founded 11 Laughter Clubs in the southern Chinese city since 2007.


"People get worried easily because housing is so expensive, the cost of living is getting higher and people are concerned about whether they can keep their job."


The 35-year-old trained hypnotherapist set up Hong Kong's first laughter club in 2007, after he discovered the concept of laughter yoga -- made popular as an exercise routine by Indian physician Madan Kataria in 1995.

Since then hundreds of heavy-hearted Hong Kongers have signed up for the free classes, a sign, experts say, of the city's underlying health and social problems.

"When you laugh, you're happier, you become positive and everything else will become better," Yu says after a one-hour laughing session in a park.

"Ho ho, ha ha ha," the group of 30 students recite. They combine the exercise with deep yogic breathing, give each other high-fives, clap and waddle like penguins, all in the name of laughter.

The fake laughter very soon breaks into the real thing, demonstrating one of the core principles of laughter yoga: laughter has physiological benefits whether it is fake or real.

As the adage "laughter is the best medicine" goes, researchers credit belly laughs as a recipe for a healthy heart. It helps expand blood vessel linings to increase blood flow, reduces stress hormones and boosts the immune system.

A British study last year showed 15 minutes of laughter increased the level of pain tolerance by around 10 percent, as the action helps to trigger the release of endorphins, the body's naturally produced pain killers.

"It was a bit awkward in the beginning when we tried to fake the laughter with the 'ho ho, ha ha ha', but after a while you can tell the difference and you feel more relaxed," said Kaman Wong at one of Yu's classes.

The 37-year-old student joined the laughter club two years ago when he was a supervisor at a food processing firm.

"The work was stressful. There was a lot of overtime work, I had to deal with many workers. If anything went wrong I was responsible, but I've learned how to laugh away all the stress," he says.

But on top of his work problems, he said the pressure-cooker atmosphere of Hong Kong itself was getting him down.

"Everyone is like a balloon that is about to explode in Hong Kong. If you smile at me, I wouldn't know how to react to that. I think there are just a lot of barriers among Hong Kongers that we need to break," he says.

Social scientists say the laughter club boom highlights the stress issue faced by many residents of a densely populated city which groans under extremes of inequality, soaring property prices and cramped living spaces.

The number of people seeking psychiatric treatment at Hong Kong's public hospitals leapt 20 percent between 2007 and 2011 to 184,087, according to the Hospital Authority.

Hong Kong's suicide rate rose from 11.5 deaths per 100,000 people in 1990 to 14.6 in 2009, World Health Organization figures show. That's higher than in the United States, the United Kingdom and Australia, but lower than South Korea.

Paul Yip, director of the University of Hong Kong's Centre for Suicide Research and Prevention, says material success means more to many Hong Kongers than physical well being.

"Hong Kong is a very fast-paced society. People walk fast... They have to work long hours not because it is their choice but because they have to survive," he says.

Sky-high property prices fuelled by the entry of rich mainland Chinese tycoons into the local market mean families often have to squeeze into tiny apartments.

"Even if you're not happy, you have nowhere to go," Yip says.

In other words, Hong Kong is fertile ground for laughing guru Yu, who hopes to set up branches of his club all over the city.

"The laughter club should be like a convenience store, which you have in every community. If everyone is laughing, the society will be happier," he says.

"I hope there are more laughing ambassadors in Hong Kong to spread joy and laughter to everyone." 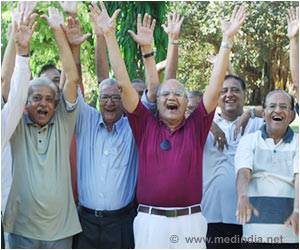 Swearing Reduces Pain
According to scientists from Keele University swearing can be a powerful painkiller.
READ MORE