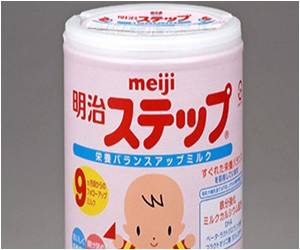 Officials found the Wakodo and Morinaga brands lacked enough iodine, and warned they could have "adverse health effects" on babies' thyroid glands and brains.

The healthiest baby foods can be made at home. Products from big brands that claim to develop infants' health in a variety of ways are no match for nutritious home-made preparations.
Advertisement

"We urge parents to take their babies to the 10 government-designated health centres for blood tests," a spokesman at the Food and Environmental Hygiene Department told AFP, adding that around 2,000 babies could be affected.


The government ordered the two products to be removed from shop shelves, following the findings of a random test on 14 milk brands.

The banned products, which are for babies aged up to nine months, were found to contain less than one-third of the World Health Organization's recommended levels of iodine, an essential nutrient for infant development.

Feeling tired or depressed is a common enough complaint, particularly among women. Paying attention to the thyroid might do them a world of good. This quiz on the thyroid is intended to educate those who want to learn more.
Advertisement
"This may affect the functioning of the thyroid gland," the Centre for Food Safety said in a statement.

"If the thyroid gland's normal functions are significantly affected, there may be potential impact on the brain development of infants."

The government said it would continue to test other brands.

Their popularity slumped after the nuclear disaster in Japan last year sparked fears of radiation poisoning.

The producers of Wakodo and Morinaga formula said the products were not intended for sale in Hong Kong, which had different requirements for iodine content than Japan.

"We presume that local importers... are marketing it there," Morinaga spokeswoman Natsumi Takahashi told AFP in Japan.

"When we export our products, we make them compatible with the standards of countries in which they are sold."

The Japanese government does not allow manufacturers to add iodine to powdered milk products, which may however contain some iodine from other ingredients, she said.

Kenta Mitsuhashi, a spokesman for Asahi Group Holdings which includes Wakodo, said the company had "no idea" how its milk formula ended up in Hong Kong.

"Wakodo does not export this product to Hong Kong at present," he said, adding that the "domestically marketed product is safe and can be used without any worry".

"The government does not allow iodine to be added to powdered milk," Mitsuhashi said.

Kyodo news agency reported that Morinaga believed formula producers were not permitted to supplement their products with iodine because of the relatively large amount of iodine-rich seaweeds consumed in Japan.

Hong Kong is a favourite place for mainland Chinese shoppers to stock up on baby formula, thanks to its relatively high health standards and strong enforcement.

Mainland China's dairy industry was rocked in 2008 when at least six babies died and another 300,000 became ill from milk tainted with the industrial chemical melamine.

Melamine had been added to give the appearance of higher protein levels.

Why Do We Eat - Nutrition Facts
News Archive
News Resource
Advertisement
News Category
Death Caused by a Rare Type Amoeba: Research Study Japan Approves Smallpox Vaccine for Monkeypox Did Human Evolution Shrink Your Brain? What to Do When Your Asthma Medication Doesn't Work? Which is Better to Improve Smoker's Health  Cigarettes or E-Cigarettes?
More News
Sign up for Wellness Consult a Doctor Sign up for Selfcare