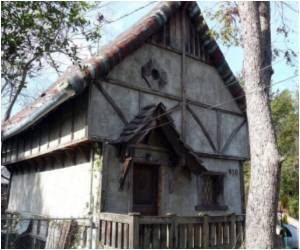 Bargainers in Hong Kong's turbocharged property market apartments that belonged to the recently dead are compelling and even better if the occupant's demise was brutal.

Popular belief in a city awash with superstition runs that the ghost of a person who dies in unnatural circumstances -- a suicide, murder or bad accident -- inhabits their home, passing misfortune onto the new occupants.

The threat carries weight in a city where feng shui consultants do brisk business; families placate the "hungry ghosts" of their ancestors with offerings and people even refrain from whistling in the street in fear of disturbing lurking spooks.


By law, buyers are entitled to details on so-called "haunted houses" -- or hongza in Cantonese -- and many rigorously check the backstory to their potential purchase.

Believe It or Not, Superstitious Beliefs are Quite Common

There are many amongst us who believe in superstitions though most might outwardly scoff at them.
Advertisement
But not everyone is afraid of ghosts, and in the cut and thrust of Hong Kong's runaway property market some investors are actively following the tragedies, aware that dark incidents push the price down.

Discounts of between 20-40 percent are the standard for haunted houses with a knock-on for the rental yield, says Eric Wong of the Squarefoot property website, which has a channel dedicated to the phenomenon.

"Hong Kong people are sensitive to ghosts and bad luck," he says.

"They believe in feng shui -- if something bad has happened in a home people won't take it... but Hong Kong is small and very expensive, so if a good discount comes there are others ready to make the investment."

And for the savvy buyer there are plenty to choose from.

Among the hundreds of macabre listings on the squarefoot.com.hk website is the home of a local football player who, crushed by the weight of debt and relationship problems, jumped from his 36th floor flat.

Then there is the divorcee whose body was discovered a month after she poisoned herself with the fumes of burning charcoal, or the woman hacked to death and mutilated by her domestic helper in an exclusive apartment block.

Such morbid tales are a boon to investors who would not live in a haunted house themselves, but will gladly put it up for rent.

"There's a group of investors who bid for these places specifically and then rent it to people who don't mind its bad history," Wong adds.

More often than not those are foreign expatriates -- widely known in local slang as gweilos -- who are not overly concerned about the history of their apartment.

Haunted houses may be sold for 40 percent below market price depending on what has happened there and how recently it took place, Ng says, equalling the impact of the 2003 SARS outbreak that had investors fleeing the city.

Also, while the market is slowing, properties remain expensive, narrowing the pool available to prospective buyers.

A deposit on an entry-level unit is more than three times a typical first-time buyer's gross household income, Barclays Capital Research said in a recent report.

Home prices have leapt more than 70 percent since 2009, while banks have increased mortgage rates five times since March, pricing all but the wealthiest out of the market.

With many young Hong Kongers forced to live at home deep into their 20s or 30s, haunted houses are providing an unlikely route onto the housing ladder.

Abby Lau, 26, who lives with her family and is saving to move, says many among her age group are looking at haunted houses as a realistic first-time purchase or cheap rent.

"Everyone knows they are cheaper and in four or five years people will forget what's happened there so it can bring a big return later," she says, laughing off the idea she herself would move into a hongza home.

But soon Lau and tens of thousands like her may find they have to live with the city's ghosts whether they like it or not.

As Ng of Rich Harvest explains, Hong Kong's seven million people cram into a small area where many buildings are old, raising the likelihood someone has died in "bad circumstances" in every block.

"Someone has to live in them... really there is no choice," she says.

Spooky Money-Spinning: Haunted Hotels in the US Offer A Night With Ghosts

In the U.S. there are scores of hotels that claim to be home to ghosts. These 'haunted' hotels advertise their spooky pasts to attract plenty of visitors hoping to catch a sight of
Advertisement
<< Day -2, Hangover Persists in Employees After Boozing All Wee...
Friends Impact Our Social Skills, Not Relatives >>

Woman Photographs 'kid's Ghosts' at A Haunted Cemetery in Sydney

A-Z Drug Brands in India Indian Medical Journals Drug - Food Interactions Selfie Addiction Calculator Pregnancy Confirmation Calculator Blood Donation - Recipients Diaphragmatic Hernia Sanatogen The Essence of Yoga Color Blindness Calculator
This site uses cookies to deliver our services.By using our site, you acknowledge that you have read and understand our Cookie Policy, Privacy Policy, and our Terms of Use  Ok, Got it. Close
×