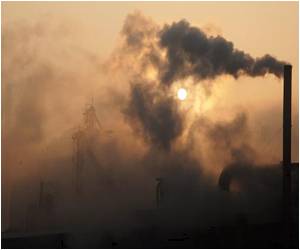 In an ongoing battle to combat air pollution, Hong Kong announced a new air quality health index, the first in Asia to use the system.

The Air Quality Health Index (AQHI), introduced in Canada in 2005, will replace the city's nearly two-decades-old Air Pollution Index (API) amid growing concerns about the city's air quality and a need for more comprehensive monitoring data.

The city's leader Leung Chun-ying has pledged to make pollution one of his top priorities during his five-year term, with an official report saying it was the "greatest daily health risk" to the city's residents.


The new system, which launches on December 30, monitors the concentration levels of multiple pollutants and also the health risks associated with them by measuring hospital admissions for respiratory and cardiovascular diseases.
Advertisement
The index measures the combined readings of four common pollutants -- sulphur dioxide, nitrogen dioxide, ozone and particulate matter. In comparison the API only shows the concentration level of the highest-level pollutant.

"Under the new system, I would say that it is very competitive and very comparable to the air quality guidelines of the World Health Organization, it's a much higher standard," Andrew Lai, Deputy Director of the Environmental Protection Department, told a press conference.

"You may witness more days with air quality under the categories of high or very high," Lai said, adding that it was not because of the deteriorating air in the city, but because the measuring system is more stringent.

The government will advise residents to stay indoors if the AQHI reaches the "serious" category, the highest in a scale of one to 10, with a separate 10+ category that designates "serious" pollution.

The system will use existing ambient and roadside stations to measure pollutants in the air.

Hong Kong's authorities have plans to reduce emissions from local sources. But they admit reductions will be challenging given the city is located at the southern edge of the the Pearl River Delta, one of China's largest manufacturing centres.

The city's policies to reduce emissions include a plan to replace over 80,000 older diesel commercial vehicles between 2014 and 2019, and requiring container ships berthing in the city to use cleaner fuels, among others.

The WHO in October classified outdoor air pollution as a leading cause of cancer in humans.

Risk for Autism Increased by Combination of Air Pollution and Genetics
Newly published research says that exposure to air pollution appears to increase the risk for ......

WHO Classifies Outdoor Air Pollution a Leading Cause of Cancer
The World Health Organization (WHO) has classified outdoor air pollution as a leading cause of ......