Honduras Tries to Save Teenagers from Gangs 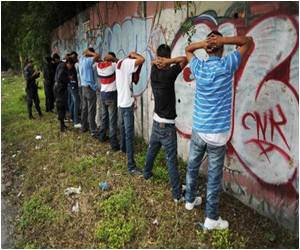 What sounds like a sports game is actually Honduras' answer to keeping thousands of troubled teenagers out of the dangerous clutches of the country's powerful and increasingly brutal gangs.

It's a boot camp where children as young as 10 are hauled into military barracks for values training in a desperate bid to break the poor Central American nation's downward spiral of violence.


Honduras has the world's highest homicide rate -- 79 per 100,000 inhabitants, according to the Violence Observatory at the National Autonomous University of Honduras based in the capital Tegucigalpa.
Advertisement
And the murder rate is continuing to creep up, leaving the government of President Juan Orlando Hernandez grappling for answers.

Even more disturbing, experts say, is the role children are playing in the violence -- and the fact youngsters have been killed for refusing to join gangs.

But Hernandez believes he may have found an answer with his "Guardians of the Homeland" nationwide initiative aiming to provide tough values education to 100,000 youths each year.

On one recent day at a logistical command center outside the capital, 152 boys and girls -- some as young as 10 but most aged 14 to 18 -- wore white T-shirts, sweatpants and sneakers.

Ready and primed for instruction, they were grouped in units bearing the names of Honduran or other Central American army elite squads -- Warriors, Cobras, Lions, Hawks and Tigers. They chanted the names one at a time.

Bitia Medina, a single mother aged 21, was the oldest of the group.

"I am not planning on joining the military, but I do like to come for the values training," she said, over a bite of lunch.

The president -- plus his supporters, political allies and some church groups backing the voluntary program -- stress they are not looking for young military recruits.

Rather, they say they are hopeful that the values, structure and discipline might help kids stay on the right path.

Olive-green military trucks pick up the youths at the crack of dawn from their homes in dirt poor, gang-controlled neighborhoods, dropping them off again in the evening. The eight-hour day includes lunch.

"This program, I think, is close to God's heart; it is a great effort," declared Alejandro Rivera, member of the evangelical group Christian Businessmen as he led some young boys in prayer.

His involvement underlines the role religion plays in the scheme.

Yet there are voices at home -- and at the United Nations -- that have expressed wide-eyed alarm at the Honduran government giving parenting duties to a national military, especially one that took power in a 2009 coup and was accused of rights abuses in the turbulent aftermath.

Hernandez is facing broader pressure over the effectiveness of his military-led crackdown on gangs, with critics pointing at the average of 86 children and youths killed every month since he took power in January.

"The best way to combat violence and insecurity is by offering vulnerable children and families sustainable alternatives," she said.

Local charity Casa Alianza, which works with street kids, said it was "outraged" by the program.

"We are convinced that militarizing kids' childhood and teenage years is not the best way to develop and promote values," it said.

But Corea countered: "They are just getting training to help them in their lives. None of them are going to be soldiers."

Sixteen-year-old Genesis Sanchez, however, has other ideas.

Kids Killed for Refusing to Join Gangs In Honduras
The horrific wave of violence against children in Honduras is speeding up with a second death of a ....

Smoking in Public Places Banned in Honduras
Honduras has enforced a ban on smoking in public places and some private areas went from Monday....

Central America Gangs Fluctuate Between Love and Death
It was ages ago when Sharon's boyfriend tried to quit the street gang he belonged to, he was ......