Homeless in New York Recycle to Make a Few Bucks 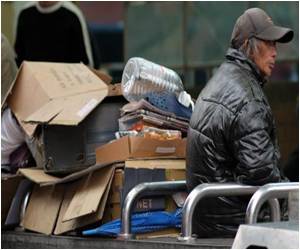 They scavenge trash bins for cans and bottles, loaded with huge plastic bags and criss-cross New York night and day.

This invisible army is made up of young and old, men and women, jobless people, the homeless, immigrants who speak little English -- all with the same goal: recycle their finds to make a few bucks.

A new study has identified a new intervention technique that can help chronically homeless, alcohol-dependent individuals without requiring them to stop drinking.
Advertisement

In this city of millionaires, there must be about 7,000 people living at the other end of the spectrum, says Ana Martinez de Luco, co-founder of Sure We Can, a center in Brooklyn where these so-called "canners" come to sort through their stuff and sell it.


For each can or plastic or glass bottle, they get five US cents.

If they sort really carefully and separate the stuff by brand, they can get 6 or 6.5 cents under a New York state law called the Bottle Bill, first passed in 1982 and then amended in 2009.

50 Percent of Homeless Men Had Traumatic Brain Injury in Their Life: Study

At least one traumatic brain injury is found in the life of homeless and 87 percent of those injuries occurred before the men lost their homes as studied by scientists
Advertisement
From Times Square to Wall Street, from Central Park to the subsidised housing blocs of Queens, there are more and more of these scavengers.

They get up early before the garbage trucks make their rounds and they often go to bed late.

The ingenuity is stunning and sad: elderly Chinese women hang huge bags of cans or bottles from either end of a long stick that they carry on their shoulders; a 45-year-old homeless man from Nigeria pushing his stuff around in a shopping cart that holds his life's possessions; a young Latino mother using a baby stroller as her can and bottle transport.

A few years ago, it would be mainly homeless or poor people doing this. But in recent years, the ranks of the invisible army have changed as the economic crisis of 2008 has left its mark.

At Sure We Can, some 60 percent of the people bringing in recyclable material are elderly. Most are immigrants.

"They have been professors, in the military -- they had have good businesses, some people have Master's degrees," said Martinez de Luco.

But one day their lives derailed.

Carlos, 27, a former chef in a Jamaican restaurant, tells how he started canning after the place closed down. But he insists he is not homeless.

Some use the money to send a bit to their families back home. Others supplement a meager retirement pension. Older immigrants who came to be with their children just try to get by.

- A matter of survival -

Anita Tirado, a frail 74-year-old Puerto Rican woman, explains that she has no right to Medicaid, the US health care program for the poor.

So every morning, sometimes as early as 4:00 am, she rummages through trash bags, even on the sidewalk of her own street. Then she goes to take care of her three-year-old granddaughter.

Tirado says she makes between 20 to 30 dollars a week, sometimes as much as 40 bucks.

It is exhausting and dangerous work. A few years ago, Tirado was beaten up while making her rounds.

After that, her children pleaded with her to stop, but she kept it up.

She says the beating took place early in the morning, and now she has learned to stay close to home.

"Now I just cross the street," she said.

Many people have no choice but to sift through garbage.

Sylvernus is from Nigeria. He was a security guard but got laid off after the September 11 attacks. He says canning has been a way to survive for the past five years but still dreams of getting a real job.

"This is hell," he said. "I really want to get out of this situation."

"People think it is easy to do this work," he said. "I have to push this heavy wagon and walk around to get cans just to stay alive."

Canners may recycle as much as 70 percent of the bottles and cans of New York, according to a recent study.

But it is no way to make a living, even doing it full-time.

A couple in their 40s who work seven days a week say they make between 300 and 350 dollars a week, a pittance in the Big Apple.

The math gets challenging. The take from 70 cans buys a small cappuccino. A sandwich is worth 100 cans. A pair of modest shoes? 800.

"It could be a real job, if the expenses of the rent or the food were not so big in New York," said Martinez de Luco.

But canning does have its virtues.

Carlos, Jose, Paula, Anita, Victoria, Maria and an elderly Chinese lady who speaks not a word of English run into each regularly at Sure We Can.

For some of them, it is therapeutic; this way, they are not cooped up in the house all day, said Martinez de Luco.

But the growing numbers of these desperate souls brings problems, too.

Some fight over turf. Others complain they can no longer find enough cans and bottles.

Martinez de Luco would like to train them to sift through the refuse thrown out by restaurants. This could be turned into compost for gardens, she said.

Treat Homelessness Before Everything Else

Find a Hospital Sinopril (2mg) (Lacidipine) The Essence of Yoga Blood Donation - Recipients Selfie Addiction Calculator Pregnancy Confirmation Calculator Nutam (400mg) (Piracetam) Accident and Trauma Care A-Z Drug Brands in India Drug Side Effects Calculator
This site uses cookies to deliver our services. By using our site, you acknowledge that you have read and understand our Cookie Policy, Privacy Policy, and our Terms of Use