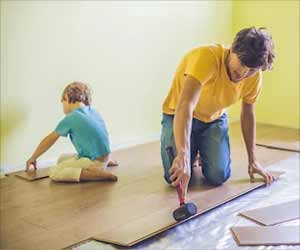 Exposure to vinyl flooring during home renovations can put your child at a higher risk of developing long-term respiratory problems, reports a new study. The findings of the study are published in the peer-reviewed journal Indoor Air.

By collaborating with international colleagues, a University at Albany School of Public Health team looking at the associations between home renovations and lung function found that children exposed particularly to a popular type of flooring experience notably declined lung function.

Led by Guanghui Dong at Sun Yat-sen University in China, Environmental Health Science professors Michael Bloom and Shao Lin, Master of Public Health student Namratha Gurram and colleagues at St. Louis University and others investigated the associations between recent home renovation exposure and lung function in children in northeastern China. The authors note that though the study was conducted in China, many of the home materials used are the same in the United States and therefore it is reasonable to expect that similar risks exist elsewhere.


The team recruited 7,326 children from seven cities in northeastern China for the study. They examined the children's lung function using spirometer recordings that measured air inhaled and exhaled, while information about home renovation projects was collected through a questionnaire completed by parents.
Advertisement
Results showed greater odds of diminished lung function among those exposed to home renovation in the past two years compared to those without home renovation. Of note, the associations were stronger among children exposed to new polyvinyl chloride (PVC) flooring compared to other materials.

PVC flooring, also known as vinyl flooring, is popular around the world because of its long-wear durability and faux wood grain appearance.

Because long-term health problems, such as asthma and other chronic respiratory conditions, emerge from impaired lung function during childhood, the authors caution that home renovation should be considered as a potential and avoidable respiratory hazard.

"Home renovations are often undertaken with little consideration of the health effects of the people living in the home," said Bloom and Lin. "Though more research on this topic is warranted, many of the same materials are used for a renovation around the world, and as such, homeowners should be aware and take precautions to limit exposure," they continued.

"I hope this study provides information for considering changing home renovation practice or lead to certain protections for children," said Gurram, who interned at the Sun Yat-sen University last summer while working with the team on this research. "It is important that this topic is explored further."

Household Dust Could be a Silent Killer
It is important to ensure that our home and surroundings are dust-free because harmful chemicals in ...

New WHO Guidelines on Housing for Better Health
The World Health Organization (WHO) has released the first-ever guidelines outlining measures to ......