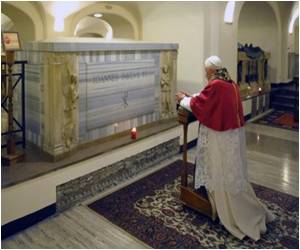 Israelis and Palestinians were putting the finishing touches Thursday on a flurry of festive preparations just days before Pope Francis arrives.

Municipal workers in the West Bank city of Bethlehem were busy hanging huge banners in Manger Square outside the Church of the Nativity, where Francis will celebrate mass on Sunday.

A supposed miracle attributed to Paul VI has been recognized in the Vatican, and beatification of the late Italian pope will be done in October, a Vatican source said Tuesday.
Advertisement

Giant posters of the pontiff with Palestinian leaders were also being mounted on lampposts near the main Israeli checkpoint leading to the city.


Local Christians and pilgrims are hoping to get a glimpse of the pope, even from afar, as he passes through Bethlehem and Jerusalem to visit holy sites and meet other religious leaders on a visit the Vatican has billed as a "pilgrimage of prayer."

A giant rally for children and teachers from Italy's Catholic schools had the Pope in attendance, with the Vatican saying that 300,000 people turned out for the event.
Advertisement
"I'm happy the pope is coming, but also worried he might not deliver a strong enough message of support for Palestinian Christians," said Louis Michel, who runs a souvenir stall outside the Church of the Nativity.

Francis said on Wednesday his trip would be "purely religious," aimed at praying for peace in the Middle East and improving relations with other branches of Christianity.

Argentine Rabbi Abraham Skorka, an old friend of Francis, said the pontiff would try to avoid political pitfalls in the sensitive region by dividing his visits equally between Jewish sites in Israel and Muslim or Christian landmarks on Palestinian territory.

But on the Palestinian side of Israel's vast separation barrier, people feel the visit will retain a political edge regardless.

Marwan Barghuti, one of the leaders of the second Palestinian intifada, or uprising, who has been in prison since 2002, urged the pope to end Israel's occupation of the Palestinian territories.

"The Church played a key role by putting its tremendous moral weight behind ending (South African) apartheid. We are confident this moral voice will contribute to ending occupation," he said in a letter addressed to Francis.

Bethlehem Mayor Vera Baboun told AFP as she watched some 200 municipal workers hanging banners in Manger Square that "this is how Palestine is -- religion and politics are interconnected."

Many of the banners have been produced by the Ramallah-based Palestinian Museum, and combine biblical paintings of suffering with photos of modern-day Palestinians being evicted from demolished homes or dragged away wounded from clashes with Israeli soldiers.

In Jerusalem, preparations for the pontiff's arrival are somewhat more muted, overshadowed by a stepped-up security and police presence.

Some 8,000 extra police officers are to be deployed on Jerusalem's streets for the duration of the visit.

On Wednesday, Israel placed three young Jewish extremists under house arrest on suspicion they were planning to disrupt the pontiff's visit, police said.

Restriction orders have already been imposed on two students from a Jewish seminary at Mount Zion, where the pope will on Monday hold a mass at the Upper Room where Jesus held the Last Supper.

The ground floor of the same building is revered by Jews as the tomb of King David, prompting several weeks of protest linked to the pope's visit.

And the innumerable police barriers set up inside the Old City's Christian quarter are often more noticeable than the 1,000 or so Israeli, Vatican and Jerusalem municipality flags that town hall has begun putting up.

Movement will be severely restricted in the Old City, which is home to many Palestinian Christians.

"They say it's for security, but it's political," grumbled Elias, a spice shop owner who only gave his first name.

"They want to make it seem like we (Christians) don't exist."

The three-day visit kicks off Saturday when Francis flies to Jordan. He will travel on to Bethlehem Sunday morning, then to Israel, where he will spend the rest of the day and Monday in Jerusalem before heading home.

The head of the Catholic Church faces an uphill battle if he is to unite the Catholic and Orthodox churches.
Advertisement
<< Link Between Circadian Clock and Eating Schedule may be a G...
Blocking Pain Receptors may Extend Lifespan in Mammals >>

Vent Forte (Theophylline) A-Z Drug Brands in India Sinopril (2mg) (Lacidipine) Color Blindness Calculator Post-Nasal Drip Find a Doctor Drug Interaction Checker Drug - Food Interactions Accident and Trauma Care Sanatogen
This site uses cookies to deliver our services. By using our site, you acknowledge that you have read and understand our Cookie Policy, Privacy Policy, and our Terms of Use