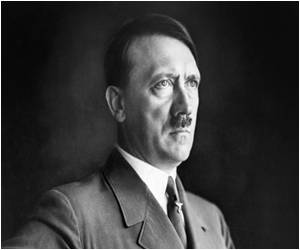 The son of a prominent German Jewish family with roots in Bavaria going back centuries, Edgar Feuchtwanger vividly remembers nearly bumping into his neighbour Adolf Hitler as a boy.

It was 1933 and Hitler, who had just become German chancellor, kept a sprawling flat on Munich's elegant Prinzregentenplatz next door to Feuchtwanger's family home.

Eight years old at the time, he had been taken by his nanny for a walk when they nearly collided with the country's most powerful man.


"It so happened that just at the moment when we were in front of his door, he came out. He was in a nearly white mackintosh," Feuchtwanger told AFP.
Advertisement
"We were in his way. He looked at me and there were a few casual bystanders in the street -- it was about half past eight in the morning and they of course shouted 'Heil Hitler!'. He just lifted his hat a little bit, as any democratic politician would do -- he didn't give the (straight-armed Nazi) salute -- and then he got into his car."

Feuchtwanger, who said several Jewish families lived in the neighbourhood, made eye contact with Hitler, who looked at him "quite pleasantly".

"I have to emphasise that if he had known who I was, I wouldn't be here," he said.

"Just my name would have been like a red rag to him."

He was referring to the fact that he was a Jew, but also to his famous uncle, Lion Feuchtwanger, one of the most popular German authors of the early 20th century.

He penned a scathing 1930 satire of the Nazi leader called "Success", which for a time ran neck-and-neck with Hitler's "Mein Kampf" in the bestseller rankings.

Feuchtwanger, who is 89, is about to go on a German tour for a book of his own, "When Hitler Was Our Neighbour", starting, of course, in Munich.

He now lives in Britain, where his parents were able in 1938 to buy a visa that would save the family's lives just as the noose was tightening around Germany's Jews.

Feuchtwanger said his family at first had only an abstract sense of the danger posed to them by the National Socialists and their personable neighbour.

"He went around Germany ceaselessly and he tended to come into Munich at the end of the week, spend a short time -- he sometimes went to his favourite restaurant, the Osteria -- and then he would move on to his mountain retreat at Berchtesgaden," he said.

"After about 1935-36, you couldn't any longer walk past his front door. You were kept to the opposite side of the road but you could see these cars parked there so I knew he was there even before I left the house."

Feuchtwanger believes he as a child had a keener sense of what his thoroughly German Jewish parents and their friends could not believe: that the country they loved would turn on them with such speed, hatred and, finally, bloodlust.

"We were aware of the threat probably even in 1932," he said, his English still lightly accented by his native German.

"But of course we didn't realize how radical that threat was, how lethal it would get. My father had got that quite wrong."

That changed during the Kristallnacht pogrom of November 9-10, 1938, when his father Ludwig, who worked for a publishing house until he was stripped of his job, was swept up in the mass arrests.

He was seized at their flat, within view of Hitler's front window, and held at the Dachau concentration camp north of Munich for six terrifying weeks.

Lion Feuchtwanger had already fled for France in 1933 because his books were banned and burned by the Nazis.

He and a few other relatives pooled together to give Ludwig the then hefty sum of 1,000 British pounds upon his release that would allow the family to escape the Third Reich.

Fourteen-year-old Edgar was sent to England first and his parents joined him two months later.

His aunt Bella, however, stayed behind in Prague and would die at the Theresienstadt concentration camp.

When the war broke out in September 1939, Feuchtwanger was beginning a new life at a British boarding school.

His start was difficult, with the English boys making fun of his German name, calling him "fish finger" and "Volkswagen".

But he would go on to outlive Hitler, study at Cambridge, marry a British general's daughter and become a history professor at the University of Southampton.

He said French journalist Bertil Scali approached him a few years ago with the idea of a "literary" memoir that would expand on the given facts.

Feuchtwanger, who is still looking for an English publisher, said his birthplace now seemed completely transformed.

"I tend to look at the German newspapers on my computer. One feels that somebody like (Chancellor) Angela Merkel, she's blissfully without charisma," he said with a hearty laugh.

"One's had enough charismatic personalities in German history to last for good and all."

Mein Kampf Copies Signed by Hitler All Set to be Auctioned!
Two rare copies of "Mein Kampf" signed by the author Adolf Hitler himself will now be auctioned in ....