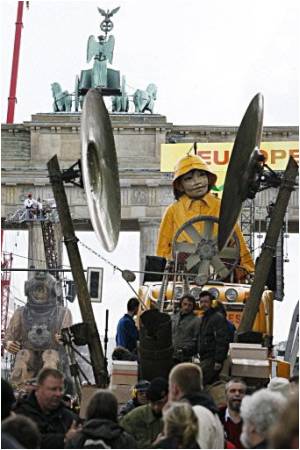 Berlin's historic Zoo Palast cinema re-opens on Thursday. A major renovation to restore the sparkle to the former Cold War-era theatre took place. The theater was once the star-studded cultural boast of the city.

The Zoo Palast, which owes its name to a nearby city-centre zoological garden, was built in the mid-1950s out of the ashes of a silent movie theatre.
Advertisement

The UFA film production company, a leading maker of German movies between the two world wars, chose the spot near 'Berlin's Champs-Elysees', the Kurfuerstendamm, to open the UFA Palast am Zoo in 1919.


Audiences marvelled at masterpieces by filmmakers such as the Austrian Fritz Lang, who was behind the 1927 expressionist science fiction film "Metropolis" or his drama thriller from 1931, "M".
Advertisement
But in November 1943 the building was destroyed in an Allied bombing raid and in 1955 its ruins were razed to the ground to make way for the Zoo Palast, with its bold, angular architecture.

"We have kept everything we could (of the historic building) in order to maintain the traditions and the soul of the Zoo Palast," said Hans-Joachim Flebbe, who operates the cinema and has spent 5.5 million euros ($7.4 million) on the three-year restoration.

Flebbe, 62, who has worked in cinemas for four decades, said he wanted to combine comfort with the Zoo Palast's original chic and glamour for an experience that would draw those disillusioned by the modern movie-going experience back to the big screen.

"Our goal is not to take the audience away from the multiplexes. It's to reconcile with the cinema those who were no longer coming because it was too noisy, too stressful," he said.

Ushers will guide cinema-goers to roomy leather seats where they will be able to stretch out and order drinks. Mobile phone noise is strictly frowned upon and loud or strong smelling snacks are off the menu.

When West Berlin was an enclave on the Cold War's communist map, the Zoo Palast experienced its golden age, becoming a hive of activity during the city's famed Berlinale film festival.

As well as featuring large on the silver screen, world movie stars such as Errol Flynn, James Stewart, Sofia Loren and Robert de Niro stepped out on to the cinema's red carpet.

But in 1999 the festival shifted its centre to Potsdamer Platz and its host of multi-screen cinemas, leaving the Zoo Palast to slowly decline until it was closed for renovation in 2010.

Cue Flebbe, who in 1977 entered the scene, buying his first independent cinema. By 1989 he had set up Cinemaxx, a multiplex chain, and would come to own nearly 400 screens.

In 2008, however, he was removed by the group's shareholders amid a difficult climate for cinemas generally, with dwindling audiences and the rise of DVDs and film piracy.

Flebbe decided on a strategic about-turn to focus instead on what he calls "premium cinema".

With big band-style jazz setting the mood, the Zoo Palast will be able to accommodate 1,650 spectators in its seven screens boasting the latest sound and image technology as it mixes modernity with classic features.

Its facade and two of the screening rooms are under heritage protection.

"We have kept the woodwork from 1957 from the original cinema... We've also left intact the entrance on the terrace and kept certain doors," said architect Anna Maske.

But the higher end experience comes at a cost -- tickets are priced between 6.50 and 13.50 euros, which is expensive for Berlin.

And, surprisingly, given its location in a touristy part of a cosmopolitan city, there are currently no plans to screen films in their original language.

Source: AFP
Advertisement
<< Decision-Making Is A Very Important Aspect In Our Lives, Bu...
Reading Is A Favorite Past-time Among Young Adults, Who Pre... >>

Asian Cinema the Next Major Battleground for Anti-Smoking and Anti-Cancer Groups
Anti-smoking and anti-cancer groups will now have to turn their focus towards Asian cinema with the ...

World's Oldest Cinema to Reopen in France
The world's oldest movie theatre, where the first films of the pioneering Lumiere brothers were ......

Cinema Paradiso Struggles to Stay Open in Damascus
Prior to the conflict, the Fardos cinema used to attract poor customers from the outskirts of ......