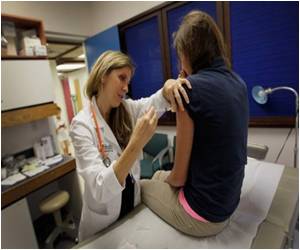 In a study evaluating outcomes of Hispanic women with endometrial uterine cancer, researchers have found that Hispanic women in the United States were significantly less likely to survive the cancer than non-Hispanic white women.

The study took place at the University of Texas Medical Branch at Galveston. A total of 69,764 women diagnosed with endometrial cancer between 2000 and 2010 were included in this study of public-use data from the National Cancer Institute's Surveillance, Epidemiology, and End Results Program. The study is available online in the December issue of Gynecologic Oncology.
Advertisement

According to Dr. Ana M. Rodriguez, assistant professor of obstetrics and gynecology at UTMB and lead author, the purpose of the study was to determine whether demographic factors, tumor characteristics, and treatment influence the endometrial cancer-specific survival of Hispanic women compared with non-Hispanic white women. Results can be generalized to the entire U.S. population.


Endometrial cancer is the most common malignancy of the female reproductive organs. It begins in the cellular lining, the endometrium, of the uterus.
Advertisement
"Most research to date has focused on comparisons of white and black women with endometrial cancer" Rodriguez said, noting that very few studies have examined the age distribution, disease presentation, and endometrial cancer outcomes among Hispanic women.

"While the incidence of endometrial cancer is higher in non-Hispanic white women, we found that minority patients tend to be diagnosed with more aggressive cancer. Early detection is vital to improving endometrial cancer survival as most of the disparity was due to the progression of the disease," she said. "Increased efforts are needed to improve education and increase access to early care for Hispanic women."

Currently there is no screening test for endometrial cancer like there is for cervical cancer (the Pap smear). Endometrial cancer diagnosis is usually the result of a woman's coming to her doctor with symptoms like unusual bleeding or discharge. Endometrial tissue sample biopsy is then usually performed to test for cancer.

The UTMB research suggests that Hispanic women don't seek medical attention promptly upon experiencing symptoms, thus allowing the cancer to progress to a more deadly stage instead of addressing it early.

The survival curves showed that Hispanic ethnicity, whether a woman is U.S.- or foreign-born, is associated with less favorable outcomes than being non-Hispanic white.

The National Cancer Institute's SEER Program includes 18 population-based cancer registries covering approximately 28 percent of the U.S. population. This study was supported by the Comparative Effectiveness Research on Cancer in Texas Project. CERCIT is part of a new area of research that examines cancer care practices that lead to both good and poor health outcomes and identifiies gaps in services for different populations.

Immigration Enforcement Policies Negatively Affect the Health of Immigrant Hispanics
The rates of late and inadequate prenatal care among Hispanic mothers increased in the counties ......

Type 1 Diabetes Rates Among Non-Hispanic White Youth Have Increased Significantly
A new study has revealed that the rate of non-Hispanic white youth diagnosed with type 1 diabetes .....

Depression and Anxiety Rates Vary Widely Among Groups of Latinos and Hispanics in US
A new report says that rates of depression and anxiety vary widely among different segments of the ....

Fibroids in Uterus
Uterine fibroids are non-cancerous tumors that take origin from the myometrium and the neighboring t...

Uterine Cancer
Uterine Cancer or Cancer of the Uterus (or Endometrial Cancer) refer to cancers affecting the uterus...