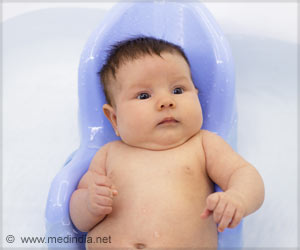 Childhood obesity is a growing health concern worldwide. In recent years instances have nearly tripled, with 17 per cent of young people in the US now classified as obese. Previous studies have revealed that Hispanic children are disproportionately affected. According to a recent study, 15.6 per cent of Hispanic children aged between two and five years are obese, compared to 5.2 per cent of non-Hispanic white children of the same age.
Advertisement
‘Obesity during the first 12 months of life can predispose to increased body weight in later years. Health authorities should develop personalized guidelines to target different population groups, to prevent obesity.’

The rate at which babies gain weight in the first few months after birth is often linked to their chances of being obese for the rest of their lives. However not enough is known about which factors might lead babies to be overweight by their first birthday.


To investigate how these factors may differ between Hispanic and non-Hispanic white families, Hazrati, Khan and their colleagues analyzed data contained in the Inova study called "The First 1000 Days of Life and Beyond". Information was extracted from 1009 one-year-old children, 302 (30.0 per cent) of whom were Hispanic and 707 (70 per cent) were non-Hispanic white children. Genetic data was available for 543 of the 1009 children included in the study and there was a high agreement rate between ancestry genetic data and reported ethnicity. The researchers gathered information about babies and their parents, whether they were breastfed and how soon they were introduced to solid foods and fruit juices from survey data, questionnaires and medical records.
Advertisement
Three in every ten (30.1 per cent) of Hispanic babies were found to be overweight aged 12 months, compared to just over one in every ten (13.6 per cent) non-Hispanic white children.

"The rate of excess weight in the Hispanic population was strikingly higher in this cohort, even at the very young age of 12 months," states Hazrati.

Although various social and cultural factors were found to have varying influence on the families in the different ethnic groups, in combination these did not fully explain the marked differences in weight gain between Hispanic and non-Hispanic white children. Hazrati suggests that these findings might point to an underlying genetic predisposition and epigenetic influences towards obesity in different ethnicities.

"As there are so many different factors influencing the development of obesity in young children, health authorities should consider developing personalized guidelines targeted to different populations in an effort to stem overall obesity in the US population," explains Khan.

Source: Eurekalert
Advertisement
<< Diet-related Deaths From Cardiovascular Diseases are Prevent...
Healthy Food Choices Depend on Nearby Foods on Grocery Shelf >>