Standardized rates of hip fracture have steadily declined in Canada since 1985, with a more rapid decline between 1996 and 2005 and a more marked decrease among individuals age 55 to 64 years.

The report appears in the August 26 issue of JAMA.


Osteoporosis is a common bone-thinning disease that predisposes individuals to fractures, according to background information in the article. "Because the prevalence of osteoporosis increases with age, the global burden of osteoporosis is projected to rise markedly over the next few decades as the number of elderly individuals increases," the authors write. "The incidence of hip fractures is an index of osteoporosis burden and the potential impact of preventive efforts in the population."


William D. Leslie, M.D., M.Sc., of the University of Manitoba, Winnipeg, Canada, and colleagues analyzed nationwide hospitalization data from the Canadian Institute for Health Information for 1985 to 2005. A total of 570,872 individuals were hospitalized for hip fracture during this time period.

Over the 21 years, age-adjusted rates of hip fracture declined 31.8 percent in females and 25 percent in males. The largest percentage decrease was observed among individuals age 55 to 64 years; hip fracture rates decreased by almost one-half in females and about one-third in males in this age range. Detailed analyzes identified a more rapid decline beginning around 1996. "For the overall population, the average age-adjusted annual percentage decrease in hip fracture rates was 1.2 percent per year from 1985 to 1996 and 2.4 percent per year from 1996 to 2005," the authors write.

"Similar trends have been reported in other countries, including the United States," the authors write. The reasons for the decrease are not clear, they note. The decline began before the widespread availability of bone density testing or pharmacological treatments for osteoporosis, and there is little evidence to suggest that improvements in physical activity, calcium intake, vitamin D status or prevention of falls are responsible. "Overweight and obesity are epidemic in modern societies and may contribute to reduced fracture rates," they write.

Although the percentage rates decreased, the absolute number of hip fracture increased over the study period, a phenomenon attributable to the changing age structure of the population, the authors note. "Hip fractures continue to exert major effects on the population, particularly the elderly, and on the health care system, related to the morbidity, costs and mortality from these fractures," they conclude. "Therefore, the decreasing incidence rates are not grounds for complacency toward osteoporosis prevention and treatment."

Hip Fracture Risk Hiked With Usage of Heartburn Drugs
Even short-term use of popular acid-reducing heartburn drugs could increase the risk of hip fractures, a new study has found.
READ MORE 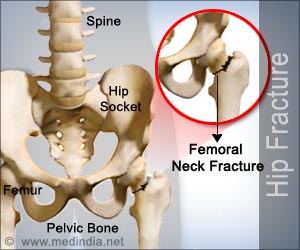