Hindrance for Child Organ Donation Due to Misconceptions by Parents 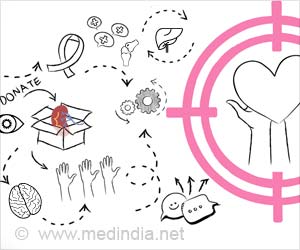 The wait for an organ is longer for children than for adults as an organ from another child of similar are or size would be the best suitable match. When it comes to counselling parents, it is difficult to introduce the topic about organ donation, according to a new national poll, misconceptions about child organ donation may further complicate the process.

The C.S.Mott Children's Hospital National Poll on Children's health at the University of Michigan had responses from 2005 parents with at least one child aged 0-18. The analysis showed that that the major concern for the parents were misunderstandings about their child's suffering, medical care and if there were any costs that were related to organ donation for children. One in every four parents said that their driving age teen is registered to be an organ donor.

The poll co-director Gary Freed, M.D.,M.P.H said that they discovered that parents had many misconceptions about child organ donation.


Freed goes on to point out that this is not a typical topic for discussion in schools or other platforms, hence generally parents become aware about child organ donation during their most difficult time of their lives. Not all hospitals have trained personnel to have proper discussion with grieving parents.
Advertisement
24% of parents who have children in their teens between the age 15 - 18 said that their children registered as organ donors. 22% of parents said that they would not encourage their children to choose the option to be registered organ donors, while 49% said that they would.

About less than half of the parents said that their teen has received some sort of awareness about organ donation. Most of the time teens are unlikely to receive information up until they have to make a decision to be registered as an organ donor.

Almost half of the parents (54%) showed that most of their concerns were whether their child's life would be saved in the event of a life-threatening situation and that their child would suffer more if they kept their child alive for organ donation (53%). The cost of organ donation(30%) and not enough awareness if their child was in a position to donate (33%) was another concern.

6% of the parents said that they did not want to entertain the thought of death and organ donation about their child. Parents of children (17%) ages 0-14 showed an interest to gain more knowledge on organ donation while 52% were not interested. 64% parents preferred learning about organ donation from their child's primary care provider while 37% from an organ donor organization. 24% felt they preferred gaining knowledge from local hospitals and 7 percent preferred to discuss it with a clergy member.

The organ transplant waitlist for kidneys, livers, hearts, lungs and other organs according to the Federal Organ Procurement and Transplantation Network have more than 2000 US children.

Freed said that parents understood that when child organ donation is done it helps save the lives of many other children.

More awareness should be given to help them understand their decision could help save many lives.

Source: Medindia
Advertisement
<< SC Orders Govt of India to Formulate Plan to Curb Pollution
Now Apple Allows You to Access Your Health Records on Your i... >>

India Aims to Overcome Shortage of Organ Donation
India's Department of Biotechnology has decided to give a big push for research in tissue ......

Canadian Donation Policy Has Raised Organ Donation in Ontario by 57%
Since 2006, Ontario organ donation has increased after the implementation of a new Canadian policy, ...