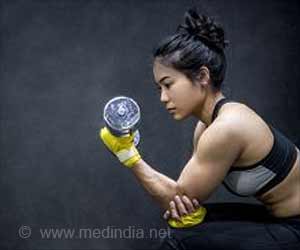 The study found that patients who practiced HIIT lost more body fat, gained more lean muscle mass and trimmed more inches off their waists--all of which play a role in heart health--than patients who performed moderate-intensity exercise, including brisk walking and cycling. It is the first study to examine the effect of HIIT on body composition and fat distribution in patients with cardiovascular disease.
Advertisement
‘After suffering a heart attack, most patients are advised to participate in cardiac rehabilitation to help recover their health and prevent future heart problems. These programs typically include supervised exercise, help with managing medications, and counseling to help patients quit smoking, eat well and reduce stress.’

"A considerable amount of research on HIIT has been done in athletes to demonstrate its ability to improve total exercise capacity and sports performance," said Yaoshan Dun, MD, PhD, a cardiac rehabilitation specialist at Mayo Clinic and Xiangya Hospital of Central South University in Changsha, China, and the study's lead author. "Scientists and clinicians are just beginning to recognize the power that HIIT may have in clinical populations to prevent a second heart attack in patients who've already had one."


The study examined outcomes from 120 cardiac rehabilitation patients treated at Mayo Clinic. In the first week, all patients performed moderate-intensity continuous training. After that, patients who were physically capable of exercising at a high intensity for 20 minutes were offered the opportunity to try HIIT. In total, 90 patients switched to HIIT while 30 continued with the moderate exercise regimen. The participants in both groups were 67 years old, on average, and the two groups were also similar in terms of sex, body mass index (BMI), medications and other illnesses.
Advertisement
The exercise program included three sessions per week for 12 weeks. Patients performing HIIT alternated between one-minute periods of high-intensity exercise (for example, running at a pace that makes it very difficult to talk) and three to five-minute periods of low-intensity exercise (such as walking at a casual pace), completing four to eight of these alternating intervals in a session. Patients who chose moderate-intensity training performed 30 continuous minutes of moderate exercise, such as walking or cycling at a pace that is challenging but sustainable.

After 12 weeks, patients performing HIIT had lost about 4 more pounds of body fat, gained about a pound and a half more lean muscle mass, and trimmed about an inch more off their waists, on average, than patients who did the moderate-intensity regimen. However, there was no significant difference between the two groups in terms of total body weight or BMI.

Both the amount and distribution of fat in a person's body affects their risk for heart problems. Carrying more fat around the abdomen is associated with the greatest risk. The lack of a significant difference between the two groups in terms of total body weight or BMI is likely related to the fact that participants performing HIIT gained muscle while losing fat, Dun said. Since HIIT-performing patients showed evidence of trimming more belly fat, those patients likely reaped greater benefits in terms of heart health.

"These findings support the use of HIIT as an essential treatment tool to improve body composition in heart attack patients enrolled in early outpatient cardiac rehabilitation," Dun said. "Our data suggest that, compared to moderate-intensity continuous training, supervised HIIT results in greater improvement in these patients. HIIT may contribute to better outcomes for patients with abdominal obesity who have cardiovascular risk factors or established heart disease."

In a separate study, Dun and colleagues compared HIIT to moderate-intensity training for patients in cardiac rehabilitation with metabolic syndrome, a cluster of disorders associated with heart disease including high blood pressure, blood sugar, HDL cholesterol and triglycerides. The results of that study similarly suggest that HIIT brings greater benefits in terms of reducing belly fat while being equivalent to moderate-intensity exercise in terms of overall body weight and BMI.

All You Need to Know about High Intensity Interval Training
HIIT alternates between low and high-intensity workouts, thereby burning more fat and is much ......