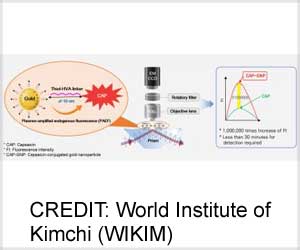 A novel analytical tool for the ultra-trace ratiometric detection of capsaicinoids has been developed by the World Institute of Kimchi (General Director Dr. Jaeho Ha).

The new analytical method jointly developed by a team led by Dr. Hye-Young Seo of the Hygienic Safety and Analysis Center at the World Institute of Kimchi and a team led by Professor Seong Ho Kang of the Department of Applied Chemistry at Kyung Hee University is a combined technology of "endogenous fluorescence imaging techniques" and "total internal reflection fluorescence microscopy." This method amplifies fluorescence by transferring the plasmon resonance energy of single gold nanoparticle to single capsaicinoid molecule.
Advertisement
‘The development of a new capsaicinoid analysis method will help provide detailed information on the spicy taste of kimchi products, allowing consumers to choose kimchi of their preferred taste.’

Endogenous fluorescence imaging techniques: It is a technology that can detect the fluorescence of a molecule, which enables single-molecule quantification.


Total internal reflection fluorescence microscopy (TIRFM): It occurs when the angle of incidence of light is greater than the threshold value (i.e., critical angle) at two interfaces with different refractive indexes and detects fluorescence in the electromagnetic field generated on the opposite side of total reflection. In particular, with an outstanding signal-to-noise (S/N) ratio, this microscopy can detect fluorescence at the single-molecule level.
Advertisement
This analytical technique is simple enough for nonexperts to use. Without any pretreatment, the analyzer can extract capsaicinoids in kimchi, react them with gold nanoparticles, and then detect fluorescence using a total internal reflection fluorescence microscope.

Capsaicinoids refer to various analogs such as capsaicin and dihydrocapsaicin. In the past, an instrument like high-performance liquid chromatography (HPLC) was used to separate these substances and determine spice ingredients through the sum of the analogs. However, the analysis method using HPLC takes more time (about 3 h), and requires pretreatment and the use of a complicated analyzing device, which hindered the analysis of spicy tastes at industrial sites. In this context, the joint research team worked to develop an analysis method that can be easily applied to analyze the spicy tastes of kimchi in industrial fields. As a result, the team successfully devised a simple yet reliable ultrasensitive analytical technique that takes less than 30 mins, while its detection strength was improved by up to one million times.

Professor Seong Ho Kang of the Department of Applied Chemistry at Kyung Hee University said, "The key point of this new technology is that it can quantify spicy tastes quickly without needing to separate or remove capsaicinoid analogs. The significantly increased fluorescence intensity compared to existing methods enables the ultratrace ratiometric detection of capsaicinoids." The World Institute of Kimchi has focused its research efforts on analytical methods that can be used at industrial sites with the aim of establishing the spice grades of kimchi. In particular, this new analytical tool is expected to be actively used in promoting the introduction of the "kimchi taste and quality labeling system" as part of the "Kimchi Industry Cultivation Plans" announced by the Ministry of Agriculture, Food and Rural Affairs in March this year.

General Director Dr. Jaeho Ha of the World Institute of Kimchi said, " We will continue our research aimed at standardizing the tastes and flavors of kimchi."

Make Your Food Taste Salty without Using as Much Sodium Chloride: Study
Want a low salt diet without compromisation in the taste? A new study finds a way to make food ......

Sugary Food Taste Better to Women
Scientists have found that a particular gene is instrumental in enabling the preference in taste ......

High Expenses Leading to Kimchi Shortage in South Korea
Thousands of households across South Korea are getting ready for the coming winter by stocking up .....