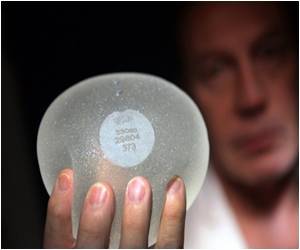 The new data from Transform, reported in the Sunday Telegraph newspaper, has prompted Health Secretary Andrew Lansley to order an urgent review into the data used to assess the risks to 42,000 British women given the implants.

The firm's figures suggest one in 14 implants made by French manufacturer Poly Implant Prothese (PIP) had ruptured since 2006 -- about seven percent.


If replicated across the industry, this would represent a far higher risk than is currently estimated by Britain's Medicines and Healthcare products Regulatory Agency (MHRA), which puts the rupture rate at one percent.

Losing sleep over the size of your breasts? Then wake up to breast enlargement! Consult us our specialists to realize your dream at affordable prices.
Advertisement
The French regulatory authority, AFSSAPS, meanwhile suggests a failure rate, including rupture, of about five percent in France, MHRA said. Health officials have advised 30,000 French women with PIP implants to have them removed.

"We believe -- and it needs rechecking -- that the rupture rate is actually higher at about seven percent," a source at Transform told the Sunday Telegraph.

The company was unavailable for comment on Sunday, while a spokesman for the Department of Health could not confirm the figures.

However, he told AFP that the review announced by the health secretary on Saturday would look at the issue, saying: "What we really need to understand is what the rupture rate is."

On Saturday, Lansley said he was "concerned" and "unhappy" about inconsistencies in the data surrounding the risks of PIP implants, after a private provider came forward with new information.

However, he stressed that Britain still did not recommend the routine removal of the implants, saying the evidence suggested no safety concerns.

The review, led by the medical director of the National Health Service (NHS), Bruce Keogh, will also look at whether improvements are needed in the regulation of cosmetic surgery in Britain. It will report back next week.

The now-bankrupt PIP was shut down and its products banned in 2010 after it was revealed to have been using non-authorised silicone gel that caused abnormally high rupture rates in its implants.