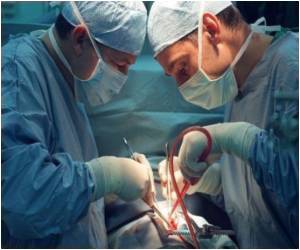 Research reported in Circulation: Journal of the American Heart Association says that African-American race is a distinct risk factor for developing life-threatening blood clots after receiving a drug-coated stent.

African-American race was the strongest predictor of clotting that occurs more than 30 days after implantation, researchers said.

For the study, researchers examined data on 7,236 patients who had stents, coated with clot-prevention drugs, implanted to prop open narrowing arteries. The drug-coated stents, also called drug-eluting stents, were implanted between mid-2003 and the end of 2008.


Even after considering other known risk factors  such as diabetes, hypertension and kidney problems  researchers found that African-Americans still experienced a higher rate of thrombosis or clotting.

The correlation between diet, lifestyle and heart disease. The importance of balanced diet life style and exercise for controlling heart disease.
Advertisement
"The bottom line is this is not just because this population is sicker or less compliant, but there is something else there that needs to be explored," said Ron Waksman, M.D., the study's lead author.

The rate of death from all causes at three years was also higher among African-Americans, 24.9 percent vs. 13.1 percent in other races.

"Physicians and patients need to know that African-Americans are at a higher risk of developing stent thrombosis, which is associated with heart attack or death," said Waksman, associate director of the Division of Cardiology at Washington Hospital Center and professor of medicine and cardiology at Georgetown University.

In the study, African-Americans had increased rates of stent thrombosis even though they took post-surgery anti-clotting medication as prescribed at a higher rate than other races.

Further studies are needed to determine what should be done to reduce the blood clotting risks in African-Americans, Waksman said. Possible genetic differences in the way African-Americans' bodies react to the anti-clotting medication clopidogrel may have an impact.

Clopidogrel, a common drug prescribed post-stent implantation, carries a black box warning on its label from the Food and Drug Administration because the drug loses its ability to keep blood clots from forming in some patients whose bodies have trouble converting clopidogrel to its active form.

In some studies, researchers found that this genetic difference occurs more often in African-Americans than in white patients. Blood tests or genetic testing determine if someone is a "poor metabolizer" of clopidogrel.

More African-American participants are needed in key clinical trials to determine if the treatment works before a drug is on the market, Waksman said. "We are committed to further exploring these disparities and how African-Americans can benefit from drug-eluting stents without increasing the risk of stent thrombosis."

An abnormal blood clot forms when there is damage to the lining of an artery or stagnation of blood in a ...

A blood clot (thrombus) in the deep venous system of the leg leads to deep vein thrombosis (DVT). DVT is a ...

Hemophilia is a rare single gene, X- linked disorder, which tends to run in families.

Pulmonary embolism (PE) is a complication that results from a block in the main artery supplying the ...