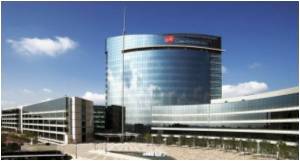 The latest restroom marvel in high-tech toilets from Japan should come with a health warning for hypochondriacs. The warning is that it doubles as a medical lab that can really spoil your day.

Japanese toilets have long and famously dominated the world of bathroom hygiene with their array of functions, from posterior shower jets to perfume bursts and noise-masking audio effects for the easily-embarrassed.

The latest "intelligent" model, manufactured by market leader Toto, goes a step further and isn't for the faint-hearted: it offers its users an instant health check-up every time they answer the call of nature.


Designed for the housing company Daiwa House with Japan's growing army of elderly in mind, it provides urine analysis, takes the user's blood pressure and body temperature, and measures their weight with an inbuilt floor scale.

Apollo Munich Health Insurance Co. Ltd is a joint venture of Apollo Hospitals Group, Munich Health. Apollo Munich offers a wide array of health insurance plans.
Advertisement
"Our chairman had the idea when he was at a hospital and saw people waiting for health checks. He thought it would be better if they could do the health tests at home," says Akiho Suzuki, an architect at Daiwa House.

Toto's engineers developed a receptacle inside the basin to collect the urine for sugar content and temperature checks, and an armband to monitor blood pressure. The readout is displayed on a wall-mounted computer screen.

"With the current model, your data is sent automatically to your personal computer, and then you can email it to your doctor," said Suzuki.

"In the next generation model, the data will be sent automatically to family members or doctors via the Internet," she told AFP.

"For now our customers are essentially middle-aged and senior people. But we hope the young generation will also become more health-conscious."

The model is the latest advance in a string of sophisticated toilets, known as "washlets" in Japan, which have become ubiquitous in recent decades.

The first models were imported from the United States, where they had been used mainly in hospitals, and quickly became standard in Japan in the booming 1980s, finding their way into at least 70 percent of Japanese homes now.

Pioneering Toto designed its first models by asking hundreds of its employees to test a toilet and mark, using a string stretched across the bowl and a piece of paper, their preferred location for the water jet target area.

"For the problem of nozzle angle and water temperature, there was a particular development team dedicated to these tests," Kuno recalled.

First-time foreign visitors to Japan are often baffled by the complexity of Japanese high-tech toilets, which feature computerised control panels, usually with Japanese language instructions as well as small pictograms.

A function called "otohime" (literally "princess of sound") produces a flushing sound to cover bodily noises. A portable gadget is available for customers who want to use it on the go, in restrooms far away from home.

In most recent toilet models, the lid automatically lifts when a user enters the restroom. Men can then push a button to also flip up the seat.

As soon as the user leaves the room, both the seat and lid automatically glide back into horizontal position, a clever feature that can preempt potential conflict between male and female members of the same household.

Toto engineer Atsuko Kuno said that the auto-lids do more than promote marital harmony and also have "a real function".

"The auto-lid was not invented for convenience but for older people and young children. They don't have to bend down to lift it," he said. "Only later did we discover that it was quite convenient, so it spread into general use."

In recent times Japanese toilets have also become more environmentally friendly, and most new models now use less than five litres (1.3 gallons) per flush, compared to 13 liters (3.4 gallons) just a few years ago.

A new smart model promises to also save electricity on seat heating by effectively "learning" its users' daily habits.

"It takes this type of toilet one week to learn when the people living in the house are using it -- in the morning, at noon or in the evening," said Kuno. So the temperature of the seat is raised only at that time of day."

Inax, Toto's main rival, also claims many recent advances, some of which it has proudly showcased at the Japanese pavilion at the Shanghai World Expo.

"Until 2001, there was a water tank behind the toilet, but customers were complaining that it was difficult to clean it. Inax was the first maker to get rid of the tank for home toilets," said engineer Ichiro Kojima.

Today's models also have a function that raises the seat and cover by several centimetre (inches) for easier cleaning because "we want the customers to know that Inax toilets are clean," said Kojima.

Japanese toilet makers, keen not to rest on their domestic success, are also increasingly making a splash on overseas markets.

Toto has focused mainly on the United States and China, where it is the market leader for luxury toilets, and entered the European market in March 2009, targeting mainly airports and hotels.

"We are also focusing on Southeast Asia and other regions... like Brazil, Russia, India," said Kojima.

The bottom line, he added, is that Japanese high-tech toilets are high-end goods: "We are targeting the luxury market, the top 10 percent."

A basic awareness about Indian health insurance for any layman for quick reference presented in a crisp format.
Advertisement
<< Nuclear Imaging Technologies Leads to Higher Breast Cancer ...
Study finds Why Some Find It Easier to Lose Weight While Ot... >>

Turmeric Powder - Health Benefits, Uses & Side Effects Loram (2 mg) (Lorazepam) Vent Forte (Theophylline) Find a Hospital The Essence of Yoga Sinopril (2mg) (Lacidipine) Diaphragmatic Hernia Calculate Ideal Weight for Infants How to Reduce School Bag Weight - Simple Tips Iron Intake Calculator
This site uses cookies to deliver our services.By using our site, you acknowledge that you have read and understand our Cookie Policy, Privacy Policy, and our Terms of Use  Ok, Got it. Close
×