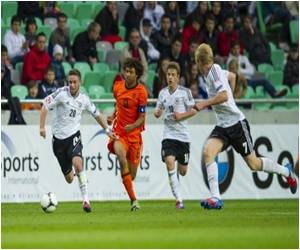 Bayer Leverkusen unveiled plans on Tuesday to turn their ground into a high-tech friendly "Stadium of the Future" for football fans. They are on course to return to the Champions League next season.

Most supporters have experienced the frustrations of poor phone coverage in stadiums, or being unable to receive emails or text messages due to high demands as other mobile phone users upload pictures onto their social media accounts.

But those gripes will be a thing of the past at Leverkusen's BayArena from July with plans to provide 350 wireless Internet connection points as part of the StadiumVision system, so that up to 20,000 football fans can surf the net or upload videos and photographs in the stadium.


"Supporters today are a lot more digitally-minded and we want to offer them a better service in the stadium," said Leverkusen CEO Wolfgang Holzhaeuser, with plans to eventually increase the service to allow all of the spectators at the 30,210-capacity venue to use the internet simultaneously.
Advertisement
"They should be able to use their tablets and smart phones effectively, to improve their experience in the stadium."

With five games left Leverkusen are third in the Bundesliga, behind this season's champions and Borussia Dortmund, but they are the first club in Germany's top-tier to offer the service.

Once they introduce the Internet service, the club say it will put their stadium on the same level as Madrid's Santiago Bernabeu, London's Wembley and the Amsterdam ArenA.

A secure wireless connection for fans will also give the club an extra avenue to sell advertising, but Holzhaeuser says it will allow fans to get closer to the club with online access to post-match interviews and press conferences.

Source: AFP
Advertisement
<< '45 Pakistan Districts at High Risk of Being Hit by Natural...
In UP Vaccination Drive to Prevent Spread of Encephalitis F... >>