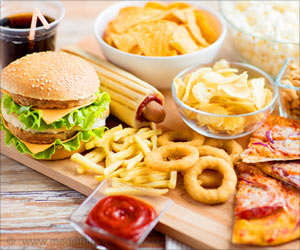 Consuming a high sugar diet can increase the risk of cardiovascular disease, even in those individuals who are healthy, reveals a new study.

In this study, healthy men were found to have increased levels of fat in their blood, after consuming a high sugar diet. The study conducted was published in the journal Clinical Science.

Advertisement
‘Consuming high amounts of sugar alters fat metabolism in the individual, which can increase the risk of cardiovascular disease later in life.’

Two groups of men were involved in this study: men who were healthy and men who had high levels of fat stored around their liver, otherwise known as the Non-alcoholic fatty liver disease (NAFLD), which can lead to serious health consequences.


Men in both groups were put on either one of the diets. One group with a low sugar diet, which consisted of about 140 calories; and the other is a high sugar diet that consisted about 650 calories.
Advertisement
"Our findings provide new evidence that consuming high amounts of sugar can alter your fat metabolism in ways that could increase your risk of cardiovascular disease," said University of Surrey nutrition professor Bruce Griffin, co-author of a study.

Besides the variation in sugar content, both the diets had almost the same macronutrient ratio, including, same amounts of carbohydrate, protein, and fat.

The research team then examined both groups of men after 12 weeks. Men who consumed a high sugar diet and men with a high level of liver fat were found to show changes in their fat metabolism that are linked to an increased risk of cardiovascular disease, heart attacks, and strokes.

Fat metabolism is a biochemical process that transports fats, which is broken down in the blood and is used by the cells in the body.

In this study, the results showed that when the group of healthy men who had low levels of liver fat and consumed a high sugar diet was found to have increased levels of fat in the liver. The fat metabolism was found to be similar to those men with the non-alcoholic fatty liver disease.

The results reaffirm that consuming a high sugar diet including packaged foods, which are loaded with sugar need to avoid, to protect oneself from developing the risk for cardiovascular disease.

Griffin said that though many adults do not consume a high sugar diet, children and teenagers can reach these levels of sugar intake by over-consuming fizzy drinks and sweets.

"This raises concern for the future health of the younger population, especially given the alarmingly high prevalence of NAFLD in children and teenagers, and exponential rise of fatal liver disease in adults," Griffin added.

High Intake of Sugar can Cause Heart Diseases in Healthy People
Healthy people with increased sugar intake can be at a greater risk of developing heart diseases ...

Your Junk Food Preference is Influenced by Your Mother's Diet During Late Pregnancy
Researchers identify two critical windows during the developmental pathway to adulthood when ......