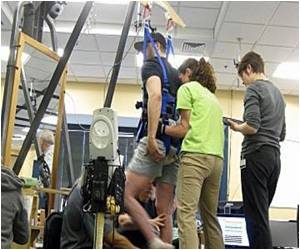 One out of nine U.S. military personnel sustaining combat injuries in Iraq or Afghanistan is suffering from spinal injuries -- a much higher rate than in previous wars.

This is according to a report in the Sept. 15 issue of Spine. The journal is published by Lippincott Williams & Wilkins, a part of Wolters Kluwer Health. "The incidence of spine trauma in modern warfare exceeds reported rates from earlier conflicts," according to the new study, led by Dr Andrew J. Schoenfeld of William Beaumont Army Medical Center, El Paso, Texas. The sharp increase in spinal injuries may reflect "enhanced personnel protection and medical advancements" that have improved survival from combat injuries that would previously have been lethal.


The researchers searched casualty records from the Department of Defense Trauma Registry for the years 2005 to 2009. The analysis included detailed information on combat-related spine trauma among soldiers deployed to Iraq and Afghanistan.
Advertisement
Spinal injuries were present in 872 out of 7,877 casualties analyzed -- a rate of 11.1 percent. Fractures accounted for more than 80 percent of spinal injuries. Three-fourths of spinal injuries were caused by explosions and about 15 percent by gunshot wounds. About three percent of personnel with spinal injuries died after receiving medical care. (The study did not include those who died before receiving medical care.)

Overall, spinal trauma occurred at a rate of 4.4 injuries per 10,000 service members deployed to Iraq or Afghanistan, including a 4.0 per 10,000 rate of spinal fractures. By comparison, the anticipated rate of injuries to the limbs was about 15 per 10,000 personnel.

Spinal injuries were more likely to occur in Afghanistan than Iraq, and in Army personnel than in members of other service branches. The highest rate of spinal trauma occurred in the Iraq War "surge" year of 2007. Spinal injuries caused by gunshot wounds were more frequent in Iraq than Afghanistan.

"The 11.1 percent rate of spinal injuries...represents the highest published statistic for Iraq, Afghanistan, or any other American conflict," Dr Schoenfeld and coauthors write. The rate of spinal injuries is perhaps 10 times higher than in the Vietnam War. The researchers suggest that, at any other time in history, most soldiers with spinal trauma were injured so severely that survival would have been impossible.

"[A]dvances in military medicine are now enabling soldiers to reach medical facilities where their spinal wounds can be identified," Dr Schoenfeld and colleagues add. They also note the high rate of concurrent injuries to the limbs and/or head and neck, reflecting the destructive power of modern military-grade explosives.

While acknowledging some limitations of their data source, the researchers believe their findings "likely represent some of the best available data as well as the most generalizable information" on spinal trauma in modern warfare. They suggest that the 11 percent figure may be useful for purposes of strategic planning and military preparedness -- including the need for treatment and rehabilitation for survivors of combat-related spinal injuries.

More Youth Suffering Spinal Injuries from Road Accidents, Say Officials
According to doctors and officials, people in the 15-35 age group are suffering from spinal ......

Reflex Control Could Improve Walking After Incomplete Spinal Injuries: Study
According to a study, a training regimen to adjust the body's motor reflexes may help improve ......