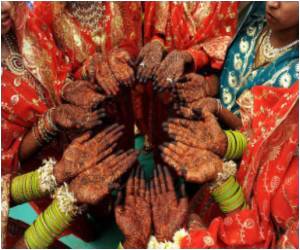 The marriage customs and rituals in the Himalayas are different indeed.

When Tashi Sangmo was 17 she married a 14-year-old neighbour in a remote Himalayan village in Nepal and, as part of the package, she also agreed to wed his younger brother.

In ancient times, the sons of almost every family in the region of Upper Dolpa would jointly marry one woman but the practice of polyandry is dying out as the region begins to open up to modern life.


"Things are easier this way because everything we have stays in one family. It doesn't get divided among many wives and it is me in charge," said Sangmo, who uses a dialect of Tibetan and was speaking through an interpreter.

Divorce can be traumatic for children and create a sense of insecurity amongst them. Couples should realize that joined parenting is important even after divorce.
Advertisement
"Two brothers bring in the money and it's me who decides what to do with it."

When Sangmo wed Mingmar Lama 14 years ago, it was understood that her spouse's brother Pasang -- then 11 -- would later join the relationship in a centuries-old practice that only persists in a few isolated Himalayan villages.

Between them, they now have three sons aged eight, six and four.

"I wanted to share this bond with my brother because life would be easier for both of us," said Pasang, 25, speaking at the family home in Simen village, 4,000 metres (13,000 feet) above sea level and five days' walk from the nearest town.

Traditionally part of the caravans that plied the route between Nepal and Tibet, the people of Upper Dolpa still follow the trade, leading yaks that bring salt from Tibet and rice from the southern Terai plains.

In the thin air high above the tree line, arable land is in short supply and farms are tiny.

But polyandry prevents the practice of each generation of a family dividing their holdings, and food supplies just manage to cover the locals' basic needs.

Marriages are typically arranged, with a family picking a wife for their oldest son and giving the younger brothers the chance to wed her later.

In some cases the wives will even help raise their future husbands, entering into sexual relationships with them when they are considered mature enough.

Unlike most men in conservative, predominantly Hindu Nepal, husbands in polyandrous marriages handle domestic duties, helping with cooking and childcare, while women are in charge of the money.

Polyandry also works as a form of birth control as a woman can only get pregnant so many times, regardless of how many husbands she has.

The polyandrous household doesn't usually acknowledge which husband is the biological parent, with the children calling father and uncles "dad".

Polyandry breaks many Western sexual taboos and often fascinates outsiders, but locals see it as natural and beneficial.

Shitar Dorje, 30, married her 37-year-old husband Karma a decade ago.

"If it ever happens that we are all in the house at the same time, then my elder brother sleeps with my wife," said Pema, 30.

"In my case there is no jealousy. I don't feel bad about the fact that when my brother is in the house our wife is with him. If I felt jealousy, then I would go and marry someone else," Pema said.

Life is simple but difficult in Upper Dolpa, 500 kilometres (300 miles) from the bustling capital Kathmandu.

Sanitation is threadbare, modern healthcare almost non-existent and women toil all day breaking rocks in the arid valleys or harvesting crops under a blazing sun.

Polyandry works well where there is a division of labour between brothers -- one to look after livestock, one to help the wife in the fields and one to join the trade caravan.

Many also see it as a kind of life assurance, highlighting the added security for women of an arrangement which means they will not be left alone if one husband dies.

According to Dutch charity SNV, which has well-established links to the area, life expectancy is just 48 for men and 46 for women.

Thajom Gurung, 60, from the isolated village of Saldang, lost her husband Choldung to cancer around 30 years ago.

But she was already married to both of his older brothers and now lives with the one surviving sibling, Choyocap, 67.

"When we were all together in the house we had turns sharing the bed with my wife -- no one worried about it," said Choyocap.

Until recently, Upper Dolpa's isolation preserved a way of life that has withered in many other places but increased tourism is shining a spotlight on a once-ignored land.

On the roofs of stone houses, where once only prayer flags hung, satellite dishes have begun to sprout, allowing Dolpalis a glimpse at a modern world whose images of romance stand in sharp contrast to their own.

SNV says that while 80 percent of households practised polyandry a generation ago the figure is now down to one in five, and it is expected to die out within perhaps two generations.

For now though, it is being kept alive by a generation for whom marriage is about pragmatism and survival in one of the world's most harsh environments.

"Polyandry is about keeping family together when life is hard," said Choyocap Gurung. "With many brothers the household is stronger and the children have a better chance for the future."

Infidelity is no longer seen as a midlife crisis alone because younger people are beginning to cheat on their spouses
Advertisement
<< Low Doses of Naltrexone Does Not Reduce Adverse Effects of ...
Independent Regulation Necessary for Ensuring Childrens On... >>

Test your Knowledge on Heart Transplantation
View all
News Archive
News Resource
Advertisement
News Category
How to Reduce Needle Anxiety in Children? Tobacco Addiction: Here's How to Break the Habit Parents are 'Winging It' on Their Kids' Mobile Use Ankle and Ankle Movements While Riding an Hoverboard Is It Healthy to Let Your Mind Wander?
More News
Sign up for Wellness Consult a Doctor Sign up for Selfcare