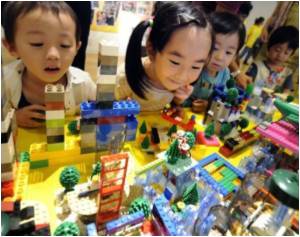 The net profit jumped 35 percent in 2012 on sales rising 25 percent, as demand for a controversial girls' range outstripped production capacity according to toy maker Lego.

The unlisted Danish company posted a net profit of 5.61 billion kroner (752 million euros or $992 million) on revenue that was up 25 percent to 23.4 billion kroner, driven in part by its new line Lego Friends aimed at girls between the ages of five and nine.

"During its first year on the market, the product line has proved a huge success, and in spite of a considerable increase of production capacity on this particular line during the year, the very strong demand could not fully be met," the company said in a statement.


The Friends collection has come under fire from feminists who accuse Lego of promoting gender stereotyping. Plastic dolls known as Ladyfigs come with long hair, beauty salons and riding camps.
Advertisement
The company, the world's fourth-biggest player in a traditional toy market dominated by Mattel said that sales were particularly strong in North America and in Asia, where it's still a relatively small player.

The gains came in spite of a decline in the value of the global market for Lego's products. Southern European markets shrank "considerably" while all Asian countries except Japan expanded, it said.

The family-owned company founded in 1934, based in the western Danish town of Billund, has seen several years of strong growth after a deep crisis in 2003-2004, since when it has been rapidly expanding its factories in the Czech Republic and Mexico.

"Based on the Lego Group's good momentum at the end of 2012, continued sales growth is expected in 2013," it said.

"However, the economic challenges in many European and North American markets are expected to result in lower growth rates for the company than achieved in recent years," it added.

Legoland Park in Malaysia to Open in September
Malaysia's Legoland theme park, the first of its kind in Asia, is all set to open up months ahead .....

Florida's Latest Addition is Legoland
The largest Legoland in the world opens Saturday in Florida with the children's haven having to ......