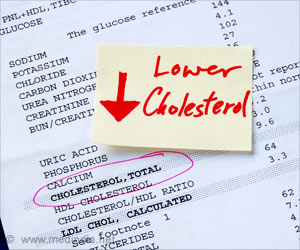 "We were shocked with the diabetes screening results," says Robert Siegel, MD, director of the Center for Better Health and Nutrition at Cincinnati Children's. "Most studies show that around 20 percent of kids will have abnormalities, so we weren't too surprised by the results of the lipid screening. Our message is to get screened, eat right, and get out and play."

Cholesterol is produced by the body (liver) and is essential for normal body functioning.
Advertisement
‘The study supports routine screening for diabetes and abnormal lipids, but most are not routinely screened, even though the American Academy of Pediatrics and other major medical organizations recommend it.’
Tweet it Now

Dr. Siegel and his colleagues at the Cincinnati Children's Heart Institute screened seventh and eighth grade students at Norwood Middle School in Ohio. Norwood is a city of nearly 20,000 people in southwestern Ohio. The children ranged from 12 to 14 years old. Seventy one percent were white, 16 percent black and 9 percent Hispanic.


Forty-two percent of those screened were either overweight or obese. Fifteen of 43 students (two declined to have their blood drawn) had a lipid screening or HbA1c out of the normal range. Two had a cholesterol level greater than 200 mg/dl.

Almost one-third of the people are unaware of the risk factors of diabetes. Find out if you run the risk of diabetes by using Diabetes Risk Assessment calculator.
Advertisement
Two students had HbA1C levels greater than 6.5, meaning that they had diabetes. Neither had yet experienced symptoms but were referred to a pediatric endocrinologist for evaluation. "More research is needed to understand why or why not parents want their children screened and whether they prefer it be done at a doctor's office or at school," says Dr. Siegel. "With our study, we demonstrate that if the middle school setting is used for cardiovascular screening, if it is feasible to do so, and the yield is high."

Health screening, along with a healthy diet and exercise, is necessary for good health and a higher quality of life.
Advertisement

To avoid obesity we must consciously control the quantity and the quality of fat that we eat and our daily ...