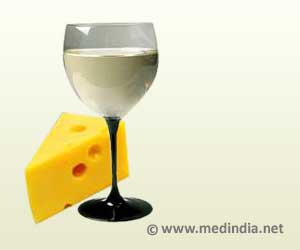 High intake of calcium or calcium supplementation could reduce the risk of colorectal adenomas in certain individuals, finds study.

Previous studies suggested that a high intake of calcium was associated with a reduced risk for colorectal adenomas and cancer, but data from the Women's Health Initiative did not support the benefit for colorectal cancer after seven years of follow-up, according to Xiangzhu Zhu, M.D., M.P.H., staff scientist in the Division of Epidemiology in the Department of Medicine at Vanderbilt-Ingram Cancer Center and Vanderbilt University School of Medicine in Nashville, Tenn.

According to Zhu, based on these data, a person with genetic changes in any of the two genes will see an increased risk for adenoma if they consume less than about 1,000 mg of calcium a day, especially if they carry genetic changes in both genes. The risk will increase by more than 50 percent for an adenoma and by 120 percent for advanced or multiple adenomas. "These patients should increase their calcium intake to reduce the risks," Zhu said.

"Our results may provide one possible explanation for the inconsistency in previous studies on calcium intake and colorectal abnormalities because calcium may primarily prevent colorectal cancer in the early stage and reduce risk only among those with genetic changes in calcium reabsorption, which involves KCNJ1 and SLC12A1," Zhu said. "If confirmed in future studies, our findings will be critical for the development of new personalized prevention strategies for colorectal cancer."

The study was funded by National Institutes of Health (National Center for Complementary and Alternative Medicine/Office of Dietary Supplements) Grant Number 5R01AT004660-04 (PI: Qi Dai). The project was conducted using resources collected from the Tennessee Colorectal Polyp Study, a project of the Vanderbilt Gastrointestinal Cancer Specialized Program of Research Excellence.

Quiz on Colon
Are you suffering from a migraine? It is possible that you have an unhealthy bowel. Strange - but .....

Prehistoric Man Made Cheese: Study
Cheese was first made 7,000 years ago by pre-historic man using perforated clay pots as strainers, ....

High Calcium Levels Behind Hyperparathyroidism In Women And Elderly
A new UCLA study has found that elevated calcium levels in the blood leads to primary ......