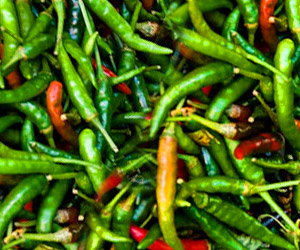 Those with high BP may find a solution in chili peppers, a study has said.

The research in hypertensive rats has shown that while the active ingredient that gives the peppers their heat-a compound known as capsaicin-might set your mouth on fire, it also leads blood vessels to relax.


"We found that long-term dietary consumption of capsaicin, one of the most abundant components in chili peppers, could reduce blood pressure in genetically hypertensive rats," said Zhiming Zhu of Third Military Medical University in Chongqing, China.


Those effects depend on the chronic activation of something called the transient receptor potential vanilloid 1 (TRPV1) channel found in the lining of blood vessels. Activation of the channel leads to an increase in production of nitric oxide, a gaseous molecule known to protect blood vessels against inflammation and dysfunction, Zhu explained.

Zhu says their study is the first to examine the effects of long-term treatment with capsaicin in rats with high blood pressure.

The findings in rats should be confirmed in humans through epidemiological analysis, the researchers said.

It isn't yet clear just how many capsaicin-containing chili peppers a day you'd have to eat to "keep the doctor away," although that's a question that should now be examined in greater detail, Zhu says.

For those who can't tolerate spicy foods, there might still be hope.

The study has been reported in the August issue of Cell Metabolism, a Cell Press publication.

Exploring the Benefits of Chili Pepper
Capsaicin has been studied for various medicinal properties including anti-coagulant effects. Chilli peppers and capsicums are rich in vitamin A, C and potassium and are extremely low on calories.
READ MORE