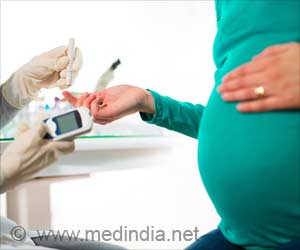 High blood sugar levels during pregnancy can increase your baby's chance of having a congenital heart defect, reports a new study. The findings of the study are published in the journal Birth Defects Research.

Congenital heart disease (CHD) is a common birth defect, and even with remarkable improvements in care, it remains to be the leading cause of non-infectious death in infants.

CHD is the result of a complicated interaction between genetic and non-genetic, or certain environmental factors acting on the fetus.


One of those environmental factors is elevated blood sugar levels during pregnancy (maternal hyperglycemia).

A new study offers an understanding of the interactions between the impact of maternal diabetes and potential gene-environmental that influences fetal heart development. This highlights that the gestational age at which the fetus is exposed to maternal diabetes is also important. "Many epidemiological studies have illustrated a strong correlation between maternal diabetes and increased risk of CHD in babies born to affected mothers," said Dr. Garg, Director of the Center for Cardiovascular Research in The Research Institute at Nationwide Children's Hospital.

Dr. Garg also added that that maternal diabetes could significantly affect the levels at which genes are expressed during fetal development.

Heart Defects in Fetus Due to High Blood Sugar Levels of Mother
The leading non-genetic risk factor for the disease is a mother having diabetes during pregnancy, .....

Here's Why Maternal Diabetes Increases Risk of Congenital Heart Defects
The risk for congenital heart defects in children increases with disruption of Nitric Oxide and ......