Here's Why Your Cellphone Has More Germs Than Toilet Seats 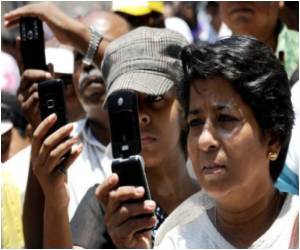 Cellphones are often passed between people which spreads the germs around - but they are never cleaned which is why it contains 10 times more bacteria than most toilet seats, according to experts.

Charles Gerba, a microbiologist at the University of Arizona, said during his ongoing experiments he has found that bugs get onto a phone because it is so close to our hands and mouths.

Nomophobia is the fear of being out of mobile phone contact. The term was coined by the Great Britain Post Office while conducting a survey on the anxieties and difficulties of mobile phone users.
Advertisement

When somebody lets a friend or a stranger use their mobile their bacteria easily gets onto the device too.


Professor Gerba added that because mobiles are electronic some people are reticent about cleaning them, the Daily Mail reported.

While toilets tend to get cleaned frequently, because people associate the bathroom with germs, cellphones and other commonly handled objects - like remote controls - are often left out of the cleaning routine.

That modern gadgets have changed the world, is a gross understatement. Yet, rising from the din is an ever increasing evidence, braced by scientific work, of the ill-health effects of modern gadgets.
Advertisement
<< Research Identifies Potential Drug Treatment for Alzheimer'...
German Thalidomide Producer Makes First Apology, in 50 Year... >>

Using cell phones or tablets during bedtime could be the reason why you are not able to sleep soundly in the night, a new study reveals.
Advertisement
News A-Z
A B C D E F G H I J K L M N O P Q R S T U V W X Y Z
What's New on Medindia