Heres The Reason Why Hypnosis Doesnt Work for All 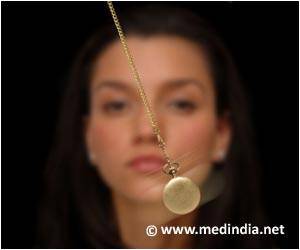 The difference in brain structures is the reason behind why some people can't be hypnotized, a research finds.

Hypnosis is described as a trance-like state during which a person has a heightened focus and concentration. It has been used clinically to help patients manage pain, control stress and anxiety and combat phobias.

Hypnosis indirectly helps with weight loss by altering the consciousness through suggestions and imagery to a more positive state.
Advertisement

The study uses data from functional and structural magnetic resonance imaging to identify how the areas of the brain tied with executive control and attention tend to have less activity in people who cannot be put into a hypnotic trance, the journal Archives of General Psychiatry reported.


"There's never been a brain signature of being hypnotized, and we're on the verge of identifying one," said David Spiegel, senior study author and professor of psychiatry and behavioral sciences at Standord University.

Hypnosis is a psychological tool that is used to explore the human mind. Experts have now highlighted that this technique may also be employed to relive pain.
Advertisement
Such an advance would enable scientists to understand better the mechanisms underlying hypnosis and how it can be used more widely and effectively in clinical settings, added Spiegel, who also directs the Stanford Centre for Integrative Medicine, according to a university statement.

Spiegel estimates that one-quarter of the patients he sees cannot be hypnotized, though a person's hypnotizability is not linked with any specific personality trait.

"There's got to be something going on in the brain," he said.

Spiegel and Stanford colleagues performed functional and structural MRI scans of the brains of adults with high and low hypnotizability.

The human brain is exquisitely intrinsic and is the seat of all emotions. If you are curious about what makes you bad, sad, silly or glad this quiz on the brain will satiate you.
Advertisement
<< Thank Your Parents For Your IQ
NGO To Launch Short Film On Breast Cancer To Create Awarene... >>

More News on:
Weight Loss with Hypnosis  Does It Work? Hypnotherapy for Sleep Disorders