Here are Some of the World's Most Spectacular Churches 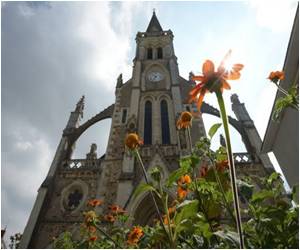 The evolving architectural science means that there are many modern churches today that is going to have one looking in vain for a traditional steeple.

One of the most recent examples, the Neue Synagoge (New Synagogue) in the German city of Mainz, is reminiscent at first sight of building blocks in a wide variety of shapes and sizes, piled on top of one another and interspersed by slanting triangular and rectangular windows.

The congressional commission on human rights and minorities in Brazil has approved a text that would grant the Church a legal right to reject gay marriage.
Advertisement

In actual fact, this Jewish place of worship, completed in 2010, is intended to represent an outsized version of the Hebrew word Kedushah, meaning blessing. The architects of Iglesia Parroquial en Rivas Vaciamadrid in Madrid, Vicens + Ramos, also make strong use of corners and edges, with finger-like protuberances projecting like truncated pyramids out of the north side of the church.


The building is also notable for its rust-colored facade, which sets it apart from other churches in terms of color.

With fewer angles, but all the more rotund instead, are the Cathedrale de la Resurrection in Evry, France, and the Leaf Chapel in Hokuto, Japan. The former catches the attention with its circular footprint and the trees ringing its steep rooftop like a crown.

Antonio Paolucci, the Vatican museum director, criticised contemporary-style churches for lacking form and harked back to the Baroque era when he said that shrines embodied religious faith.
Advertisement
The Leaf Chapel, on the other hand, is reminiscent of a cupola nestling against a slope. Its two-part shape consists of a glass half that is stationary and a second half made of steel that can be pushed up over the other. In favorable weather conditions, the indoor chapel can quickly be made into a location for an open-air wedding.

A harmonious combination of rectangular and round elements is displayed by the Jubilee Church in Rome, Italy. While the right-hand half is composed of rectangular blocks that house the various rooms and a bell tower, the left-hand side is characterized by three semi-circular layers that grow smaller as you move outward, and which lean over the other parts of the building like a cocoon. Especially for the "Eternal City" Rome with its countless Christian churches from two millennia of history, this asymmetrical house of worship does not just represent a feat of daring, but also a singular architectural highlight.

Macedonian Orthodox Church has ordered its priests and nuns to avoid using Facebook
Advertisement
<< AUC for Non-Arthroplasty Treatment of Osteoarthritis of the...
Plant-Based 'Microswimmers' Could That Propel Drugs to the ... >>