Hemoglobin Levels Are Controlled At A Genetic Level, Says Study

A gene, known as TMPRSS6, has a significant effect on regulating hemoglobin in the body, find scientists.

TMPRSS6's role was identified as part of a genome-wide association study, carried out by scientists from Imperial College London, which looked at the link between genes and hemoglobin level in 16,000 people.

Hemoglobin is contained within red blood cells and is essential for transporting oxygen around the body.


Problems with hemoglobin production cause common diseases, such as anemia, which comes from low levels of hemoglobin and is found in 25 percent of the world's population.

"This new finding is critical: understanding how hemoglobin levels are controlled at a genetic level has significant public health implications for people of all ages in developing and developed countries", Nature quoted Dr John Chambers, one of the lead authors of the study as saying.

"Abnormally high or low levels are associated with a range of serious health problems, such as poor growth (low levels) and increased risk of stroke (high levels). Changes in hemoglobin levels can also affect our susceptibility to diseases like malaria, which infect the red blood cells," said Professor Kooner, the study's chief investigator.

The new research adds to our understanding of the multiple causes of problems with hemoglobin levels, which include an iron-deficient diet, chronic diseases such as cancer, and genetic associations, such as the one described in this paper.

In the future, the finding could lead to new treatments for people suffering from chronic problems with hemoglobin levels not linked to iron in the diet.

"The enzyme protein produced by the TMPRSS6 gene is a good target for drug development. Designing a drug that enhances TMPRSS6 activity could augment hemoglobin in people such as cancer and kidney failure patients, who suffer from chronically low levels. A different drug that blocked TMPRSS6 enzyme production might bring down high hemoglobin levels", added Chambers.

The research was published in Nature Genetics.

Analysis of Hemoglobin Level Control in Dialysis Patients
Study of variations in hemoglobin levels to help dialysis patients One of the most recurrent problems of hemodialysis is anemia.
READ MORE

Hemoglobin Substitute may Increase Death Risk
The use of hemoglobin-based blood substitutes increases the risk of death by 30 percent and nearly triples the possibility of a heart attack, according to an analysis.
READ MORE

Gene Responsible For A Rare Form Of Congenital Anemia Identified
The latest electronic edition of the journal Nature Genetics reports the discovery of a new gene responsible for congenital sideroblastic anemia.
READ MORE 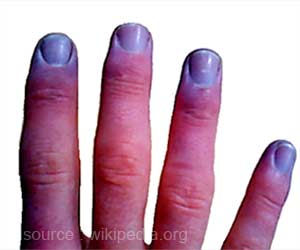 Cyanosis
Cyanosis is the bluish or purplish discoloration of the skin and mucus membranes due to lack of oxygen in the blood. Cyanosis can occur at any age, but is particularly prevalent in babies born with congenital heart defects.
READ MORE