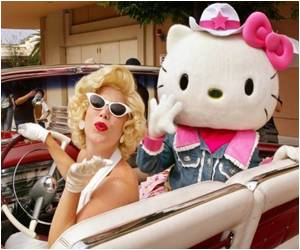 As Hello Kitty prepares to celebrate her 40th birthday, the designer and the global mega-brand defended the cute cat against new rivals.

Speaking on the sidelines of the Hong Kong Book Fair, Yuko Yamaguchi took the concept of life imitating art to another level, wearing a Kitty-style strawberry dress with dyed auburn hair piled into two buns topped with a red ribbon -- the cat's signature accessory.

As Kitty enters her next decade, she faces increasing competition from more cutting-edge cartoons like Brown and Cony, the bear and rabbit mascots of Tokyo-based messaging app LINE, which has taken Asia by storm in recent months.


But Yamaguchi insisted Kitty would cope with growing older in a digital age.

"There are new cartoon characters that are coming out daily... (but) I think Hello Kitty is the only one that can adapt to the changes in the world," Yamaguchi said.
Advertisement
The moon-faced mouthless white cat first appeared in 1974 on a coin purse in Japan and has since built up a worldwide fanbase, appearing on everything from handbags to sex toys.

Her image is licensed by Japanese company Sanrio, which says on its website that it makes more than US$5 billion dollars in retail sales each year. Hello Kitty is its flagship brand.

Yamaguchi, at the Hong Kong fair to tie in with its new Japan Pavilion, has been the lead designer of Hello Kitty since 1980 and promotes herself as the character's best friend.

"She is very motivated and open and wants to face the future," she says of the character.

There are plenty of detractors of Hello Kitty's sweetness -- entire blogs are dedicated to tearing down the cute icon, with online spoofs depicting her like a horror movie character.

But Yamaguchi insists her appeal can endure.

"There are already three generations of fans that like Hello Kitty, so I hope that there will be more fans like that in the future, like people in a family loving Hello Kitty together," she said.

The main Hello Kitty 40th birthday celebrations will take place later this year, including the first ever fan convention, hosted in Los Angeles at the end of October.